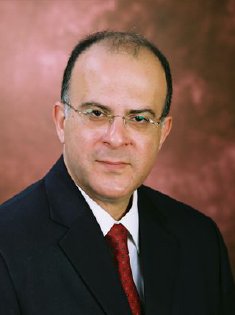 Azad-Hye, , 10 April 2006: In a country where the Armenian community enjoys the status of officially recognized minority, the Armenians are trying to exercise the right for voting and being elected into an official post, such as Representative of the Armenian Community (elected by the Armenian voters) or Member of Parliament (elected through mainstream Cypriot political parties).

Marios Garoyan (photo left) is hoping to write history and become the first Cypriot Armenian to be elected Member of the Parliament.

Garoyan, a graduate of Political Sciences, has been actively involved in the Cypriot political arena for more than 25 years. With his calm and analytical manners, he is respected not only within his own political party (DHKO) but by his opponents as well.

The Democratic Party (DHKO), which was founded by Spyros Kyprianou in 1976, fills the centre of the Cypriot political stage. He is married and has two children.

The current Representative of the Armenian Community Dr. Vahakn Atamyan (who narrowly won the elections of 9th October 2005) released on 15th March 2006 a brief report in which he gave account on his five month activities as parliamentarian representative.

In the report he mentions that he has attended all parliamentary meetings and has participated to all subcommittee discussions related to the Armenian community.

He mentions also his overseas visits to , and . During the past period Dr. Atamyan has created five committees addressing different issues such as the Melkonian Educational Institute, elementary school educational affairs, the problems related to the maintenance and reclaiming of religious properties in the occupied part of , etc.

Justifying the overwhelming presence of his supporters in these committees Dr. Atamyan refers to the refusal of the opponents to take part in the committees.

A businessman, born in in 1950, and a graduate of business administration in the , has announced he will be running for the office of the Representative of the Armenian community in the next parliamentary elections as an independent candidate.

In a written statement, Mahdessian expresses his concern and says that he is ?worried on our and our children?s future?. He criticizes the current situation and notices that ?no action is taken in order to solve the existing problems. The interest and willingness is at very low level?. He promises to do a lot to take the community out from the ?stagnant situation?.

Mahdessian is currently managing director of the International Cable Corporation (has a branch in Sharjah, UAE) and owner and director of the Troodos Electric Cables Ltd.

For a number of years he served as chairman to the board of the Armenian sports club AYMA and he is an elect member of the Armenian Diocesan Council. He is married and has two children.