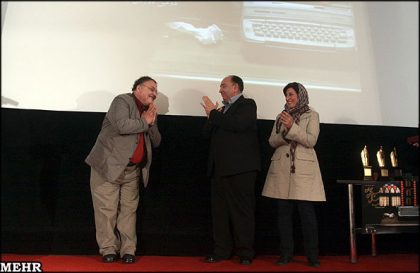 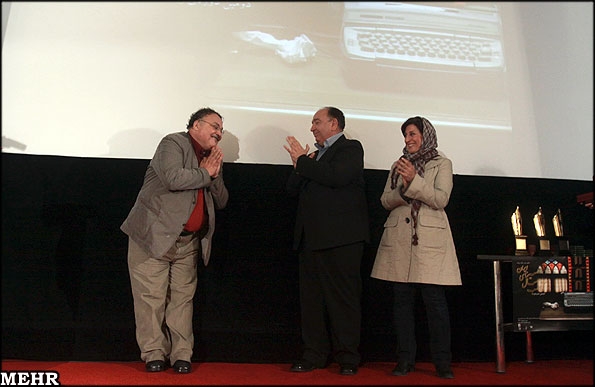 Managing director of the House Mohammad-Mehdi Asgarpur and a group of cinematic figures attended the ceremony.

The ceremony continued with screening a short film on Qukasian in which cinematic figures Khosro Sinaii, Kianush Ayyari, Minu Farshchi and Jamshid Arjmand talked about Qukasian.

Filmmaker Bahman Farmanara next made a short speech on Qukasian and said, ?I have been friends with Qukasian for years. We are both from Isfahan and whenever I get the chance to travel there, I would be sure to meet him. Actually, it is hard to befriend a critic, especially when you are a filmmaker, and he is a critic. But he is the kindest critic I know.

?He might be kind, however, he informs us of his views too, but he doesn?t tear apart the filmmaker with his criticism. He never left Isfahan and tried to develop cinema in the city and actually brought cinema experts to Isfahan.

?Qukasian has been the source of major cinematic events in Isfahan. He organized one of the most successful short film festivals there, but someone prohibited the event. He never complained about it and went on to publish a magazine of Persian art, which was warmly received at that time.?

Farmanara later pointed to the active presence of the Armenian-Christian nation residing in Iran and continued, ?Iran?s cinema is indebted to the Armenian minority (of Iran). They have made great progress in the technical aspect of cinema. For example, Samuel Khachikian and Varuj Karim-Masihi are two examples of veteran Armenian filmmakers.

?Qukasian is a successful documentary filmmaker but he also worked hard on the educational part as well. I am so happy the House of Cinema is holding a ceremony in his honor and wish him all health and success,? Farmanara concluded.

Actress Fatemeh Motamed-Arya was next to make a short speech and said, ?I am so happy to talk about Zaven. I always learned many things working with him. He never forgets where you stand in the world. His delicate characteristics are rooted in the magnificent architecture of Isfahan.

?When you are with him in Isfahan, part of his words goes back to the love his mother had toward him. For me Qukasian is like a child from whom I learn a lot. His honest personality and manner are what allow me to tell him what is in my heart, and only to him and nobody else.?

Afterwards, the honorary plaque was handed to Qukasian who also made a short speech and stated, ?Newton has said in one of his statements, ?If I have seen further it is by standing on the shoulders of Giants who have come before me.? And all these years, I tried to put myself on the shoulders of the dear and splendid giants around me to see a few steps more in front of me. Their breath gives me life and hope.

?We must understand first to learn more. I made great efforts to understand myself and others, to understand the films, filmmakers, and the critics in the country and overseas.

?In order to see a few steps further, I talked a lot with filmmakers Masud Kimiaii, Bahram Beizaii, Mohammadreza Aslani, Bahman Farmanara, and even young filmmakers and critics,? he remarked.

Managing director Asgarpur also talked about Iran?s Cinema Book of the Year award and announced that the number of the books published in this field has increased over the past year and 35 books were judged, and expressed hope to have more in the future.

The ceremony continued with presentation of the award to Ahmad Zabeti-Jahromi for his articles in the book ?Thirty Years Cinema.?

At the translation section, the award went to Mohammad Gozarabadi for the ?The Writer?s Journey? by Christopher Vogler.

At the writing section, the award went to Rokhsareh Qaem-Maqami for the book ?Documentary Animation, A New Method of Narration.?

Photo: Iranian film critic Zaven Qukasian (1st from left) bows to the audiences attending the ceremony in which he was honored for his lifetime achievement at the House of Cinema in Tehran on April 30, 2009. Director Bahman Farmanara (C) and actress Fatemeh Motamed-Arya are also seen in the photo. (Mehr/Mohammadreza Abbasi)