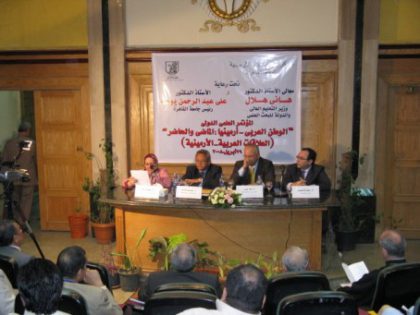 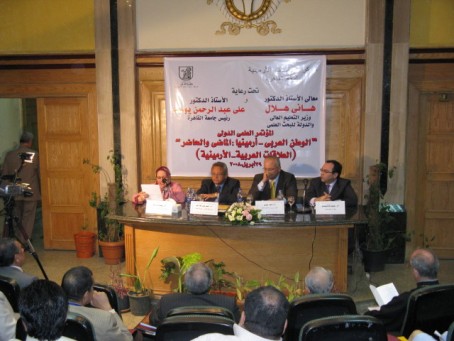 An unprecedented international forum ?Armenia ? Arab World: Past and Present? took place at the Faculty of Arts of the Cairo University on Tuesday, 29 April 2008.

The Forum, gathered around 20 prominent lecturers from Egypt, Armenia, Syria and Lebanon, specialized in Armeno-Arab relations in various domains such as politics, history, culture and literature. It was a distinctive gathering of the Arab World?s top historians, researchers and experts of Armeno-Arab relations & studies.

The event, which can be described as unique of its kind in a Middle-Eastern country, and which was made possible mainly thanks to the efforts of the Armenian Embassy in Cairo and its charismatic Ambassador Dr. Rouben Karapetian, discussed various important topics such as the history of the Armenian communities in each of Egypt, Syria and Lebanon, presented respectively by Doctors: Mohamed Refaat Al Imam, Nora Arisian and Arda Arsenian, The Armenians during the Ottoman period (by Dr. Gamal Mohamed, Egypt), the Armenians & Islam (by Dr. Hana El Haj, Lebanon), Armenians & Arabs through translation (Dr. Nezar Khalili, Syria), The position of Arabs in welcoming Armenian refugees in various Arab countries (1915-1923 (Dr. Adonis El Ekra, Lebanon), the role of Armenian intellectuals in the Arab renaissance (Dr. Saad El Din Kolayeb, Syria), Armenia as center of Arab studies (by Dr. Nicolai Hohanessian, Armenia) and many more topics presented by eminent specialists such as Dr. Shawkat Youssef (Syria), Dr. Varoujan Kazandjian, Fayez Iskandar, Mohamed El Beyaly, Abou El Yosr Farah and Fouad Raslan (Egypt), Venera Markarian & Hayk Kotcharian (Armenia), Fouad El Marei & Samir Arbash (Syria).

The organizers of the forum were: the Center for Armenian Studies of Cairo University, the Embassy of Armenia in Egypt, as well as civic & cultural organizations of the Armenian community in Egypt. AGBU Cairo contributed in the event by inviting three lecturers from Syria.

The forum was held under the auspices of Egypt?s Minister of Higher Education and Scientific Research, Dr. Hani Hilal.

An exhibition of books on Armenian Studies was also held on this occasion.