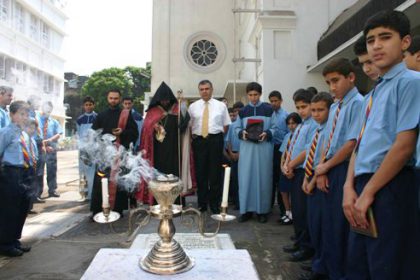 The 185th Founders Day of the ACPA was celebrated on 2nd April 2006. A church service was conducted at the Armenian Church of St. Nazareth, followed by a requiem service in the church compound, at the grave of Astvatsatour Mourdkhanian, a Julfa Armenian, the benefactor of the college.

In his sermon Fr. Oshagan Gulgulian spoke about the history of the college and emphasised the important role the institution has played in the life of the Armenians. Rev. Father said that the administration of the ACPA was placed under the authority of Holy Etchmiadzin at a critical moment in time, when the faith of this ancient and noble institution was uncertain. By handing over the administration of the college to the Mother see, its perpetuation is guaranteed.

The service was attended by the Armenian Ambassador to , His Excellency Ashot Kocharian, members of the Calcutta Armenian Church Committee, Indian Armenians and guests.

After the church service a Founders Day gathering, dedicated to the 185th Anniversary of the ACPA, was organised at the college auditorium. The audience collectively sung the ?Lord?s prayer?, followed by the national anthems of and .

Administrator of the ACPA, Deacon Tigran Baghumyan read the letter of blessing written by His Holiness Garegin II, on the occasion of the Founders Day.

Deacon Tigran read the following for Vehapar?s letter of blessing;

?The establishment of the ACPA was a unique phenomenon in the history of the Indian Armenians. Anxious to safeguard their national identity, their language and culture, the Indian Armenians made wholeheartedly every effort, with the participation of the entire community to raise funds for the establishment and perpetuation of a school, for the purpose of educating the Armenian youth and keeping alive in them the spirit of our forefathers. We send our fatherly blessings to the students of the ACPA. Dear children of our nation, be dedicated to your studies, love our Holy Church, our Fatherland and Mother See of Holy Etchmiadzin, which is an altar of light for every Armenian?. 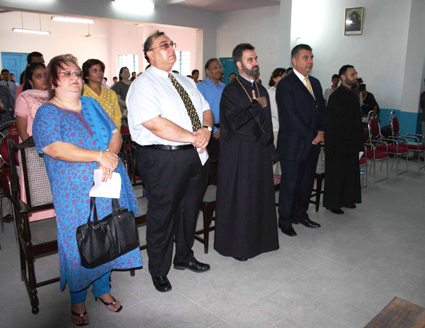 In his speech addressed to the students His Excellency, the Armenian Ambassador to India, spoke about Indo-Armenian ties, made reference to on-going projects between the two countries and emphasised the important role the Calcutta Armenians and the ACPA played in that respect.

The Principal of the college, Mr. James Dias presented his annual report and spoke about the progress and achievement of the students and referred to future plans. The principal expressed his satisfaction for the work done and said that due to the untiring efforts of the new management, the standard of the education had greatly improved. He gave his assurance that if the management continued in  its present policy the college will reach an enviable position in the near future.

During the prize distribution, the Ambassador of Armenia presented the successful students with awards for scholastic achievements and good conduct.

During the second part of the gathering the ACPA choir, conducted by Mr. Vachakan Tatevossian rendered  works of Armenian composers. Students also sung solos, recited poetry and staged a short play in English.

In his closing speech, Fr. Oshagan underlined the importance of preserving traditions of the Indian Armenian community. He expressed his joy that the ACPA has given its first harvest, since transfer of  the management to Etchmiadzin. The four college graduates, three of them from and one Indian Armenian, will continue their higher education in .

On the Founders Day another happy event took place. The Armenian Ambassador to and the Chairman of the Armenian Church Committee officially declared the senior boys dormitory opened by cutting the ribbon. The dormitory was renovated, redecorated, refurnished and will accommodated approximately thirty students.

A reception followed the celebrations. 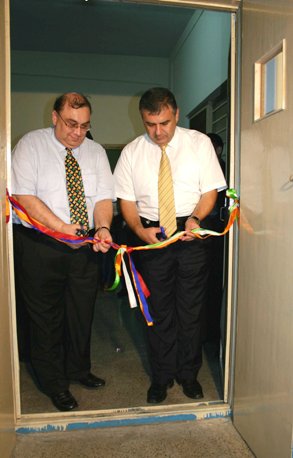 1) Requiem service (Hokehankisd) in the church compound, at the grave of Astvatsatour Mourdkhanian, a Julfa Armenian, the benefactor of the college.

2) Founders Day gathering, dedicated to the 185th Anniversary of the ACPA, organised at the college auditorium.

The and Philanthropic Academy:

We would like to thank Mr. Assadour Guzelian for the English translation