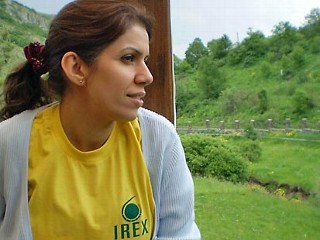 On June 26, 2008, Silva?s world was turned upside down when she was detained and later charged with attempting a ?soft revolution? to overthrow the government of Iran. On January 19, 2009, after spending Christmas, New Year?s Day and her birthday alone in jail, Silva was sentenced to three years in prison.

An appeal is underway. But at the same time, her family is working desperately to tell the world about Silva?s story in hopes of adding more voices to their cause.

A website http://www.freesilva.org/, has been setup by her cousin, to provide better understanding of who Silva Harotonian is and what were the circumstances related to her detention.

You can join Silva's family in requesting that the Iranian government grant her mercy and release her to come home to her family. For media inquiries or additional information please contact [email protected]


A MEDIA COVERAGE ABOUT SILVA HAROTONIAN IN ABC NEWS

U.S. Calls for release of imprisoned aid worker in Iran

A woman who traveled to Iran to help facilitate a maternal and child health education program is the latest victim of wrongful imprisonment in Iran, say her family and supporters in the U.S.

Now, in a rare but not unprecedented step, the U.S. State Department is calling on Iran to release Silva Harotonian, 34, saying the charge that she was “promoting a Velvet Revolution in Iran” is “baseless” and that she is reportedly in “poor and deteriorating health as a direct consequence of her confinement.”

Harotonian, an Iranian citizen of Armenian descent, arrived in Iran from her home in Armenia on June 19, 2008 to work as an administrator with a healthcare exchange program with International Research & Exchanges Board, a not-for-profit organization based out of Washington, DC. The program was supposed to bring Iranian and American public health professionals together to share and discuss health issues and practices.

Seven days later, Harotonian was reportedly arrested and charged with participating in efforts to overthrow the Iranian government, and on Jan. 19, she was sentenced to three years in prison. She has an appeal pending.

“An innocent person is rotting in jail,” said Harotonian's cousin Klara Moradkhan, who lives in the U.S. and has heard reports that Harotonian is “going to go on a hunger strike and basically kill herself.”

“She has given up hope,” said Moradkhan, adding that her cousin, a former church secretary, was not politically motivated in the least. “We never thought that an American charity would be an alarm for Iran,” she added.

Moradkhan said that days after her cousin was arrested, Iranian officials told universities and hospitals participating in the exchange program that it would not be permitted.

Iranian officials did not immediately respond to requests for comment.

IREX Vice President Paige Alexander told ABCNews.com that the organization has been involved in these types of “apolitical programs” in various countries for 40 years, without any other detainments.

“Our team is heartbroken over this situation,” said Alexander.

“The concept of her ever being accused of something like this, we thought it would just be a momentary detainment and something to scare the exchange program,” Alexander added. The organization has sent letters to Iranian judiciary officials, but has not had any response.

Newer PostIlluminating the Church of St. Gregory the Illuminator
Older PostThe dilemma of the Lebanese Armenians