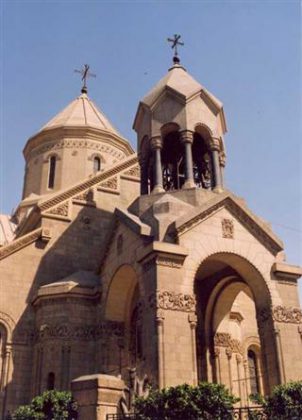 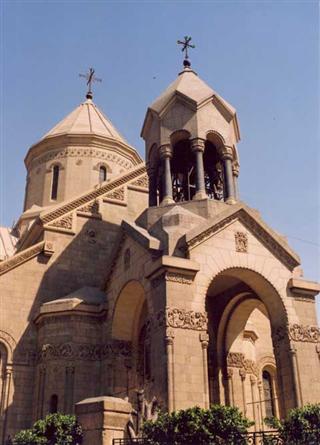 By Sarah A. Topol

Northeast of Ramsis station, along the street of the same name, an unimposing gate opens into the Armenian Church of St. Gregory the Illuminator. If it were not enclosed, it would be impossible to miss the ornate exterior of the newly renovated church gleaming in stark contrast to the decrepit surrounding buildings, reflecting the Armenian minority?s continued devotion to their traditional culture.

The three-year renovation of the Church led by Nairy Hampikian, an architect of Armenian origin, cost LE 1 million and employed 27 fulltime staff, expanding to 78 depending on the stage of the project. Funding was provided by the Parish.

Armenian immigration to Egypt began in earnest in the 1920s, fleeing from the Turkish genocide. During the 1940s, 40,000 Armenians lived in Egypt, many of whom would later leave as a result of Nasser?s nationalization policies. The current Armenian population in Egypt is estimated to number between 7,000-10,000, concentrated in Cairo and Alexandria.

The Church of St. Gregory the Illuminator is one of two Armenian churches in Cairo and the only Armenian Apostolic Church in the city. The church was erected in 1928, after four years of construction, by prominent Armenian architect Levon Nafilian. The church embodies the two archetypes of classical Armenian architecture: employing stone materials and topped with a conical dome.

The structure is not only beautifully renovated, but belies innovative building techniques employed first by Nafilian and later replicated by Hampikian. During Nafilian?s time, stone ceased to function as the main building material for church structure and was replaced by more secure reinforced concrete.

Nafilian retained the traditional style Armenian architecture is known for, but only superficially. The skeleton of the Church is constructed with reinforced concrete but the exterior?s cladding is made of narrow stone blocks.

The 16 imposing marble columns that caught my eye when I first arrived turned out to be reinforced concrete painted to look like marble. The illusion is complete.

?We have no secrets from our friends,? Hampikian joked as she catalogued materials used in the structure. She explained the renovation project took care to preserve the integrity of the initial design by employing similar building materials and techniques to the conservation effort.

During the lengthy renovation stage, the church?s basement was re-framed for increased structural support, the exterior was fortified with new stones, the dome was repaired, stained glass windows were renovated, and columns were rebuilt. The interior was cleaned and the paint gleams as brightly as if it were a new coat.

The importance of the reconstructed church lies with the Armenian community?s ties to religion. ?I can?t imagine the community without a church, it?s essential,? said Mariam Karapetian, wife of Armenian ambassador to Egypt, who was on hand to commemorate the renovation ceremony last week.

?They celebrate everything, weddings, funerals. In everything, in every community affair, the church is involved,? she explained.

Many will have the opportunity to admire the structure?s new appearance. ?Every week, we have a liturgy? [for] about 60-100 and [for] big ceremonies like Easter and Christmas the church is full,? said Ashot Mnatsakanian, the bishop of Church of St. Gregory the Illuminator. In addition to prayer services, the church is open every day to visitors.

The community has high hopes for the renovation. ?This maybe [a] new wave of belief? for the young people to get closer to the church,? Karapetian envisioned.

The outside grounds have also been renovated and the enclosed outer courtyard of greenery combined with polished exterior seems alien among Cairo?s dilapidated grey architecture. The renovation project highlights the Armenian community?s attempts to reinvent itself by preserving their heritage, using new techniques in a new world to strengthen their ties to the traditional.

As a crowd gathered on the dark wooden pews of the church to commemorate the completion of the renovation, the sweet smell of incense wafted around the sanctuary and the noise of Cairo?s ever-present cacophony fade away. A calm moment snatched from everyday life in the metropolis.