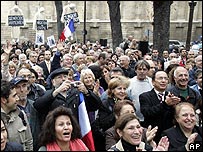 On 12th of October, The French parliament has adopted a bill making it a crime to deny that Armenians suffered genocide at the hands of the Turks, infuriating .

The bill, which would make genocide denial punishable by a year in jail and a 45,000-euro (356,400) fine, will now be passed to the Senate and president.

has threatened to retaliate with economic sanctions against .

Newspapers in differ over how to respond to Thursday's vote in the French parliament.

Some commentators believe the vote signals opposition to joining the European Union, and one writer calls “a disgrace to the civilised world”.

Other dailies appeal for a level-headed approach so that does not “humiliate” itself, and argue that still has many friends in .

The draft law is actually a clear sign that “the anti-Turkey rebellion in the EU” has begun. That's why we cannot and must not see today's vote and its results exclusively in terms of relations between and . This contains dimensions that can turn into a Turkey-EU issue, and the opposition against in the EU has begun to present an ugly face.

In Europe there are not only those who want to keep outside of the EU. There are also those who defend 's EU membership in terms of the contribution it will make to the political, economic and strategic interests of . That is why staying on track and continuing the journey to Europe is certainly to 's benefit.

As long as we keep begging the Europeans on the way towards the EU, many more genocide tales, and many other issues and embarrassing obstacles will be set before us. Those who do not see this are either liars attempting to deceive the nation or the ignorant ready to sell their country to the EU.

Let us not provoke those Turkish people who cannot control their reactions. Let us tell to “stop” but do that within civilised limits. Let us not humiliate ourselves nor incite xenophobia in .

We stress that is a disgrace to the civilised world. However, it is a precondition for , which tells others that “what you are doing is shameful in terms of freedom of expression” first of all to get rid of its own sources of shame.

is not alone in this move. The West has changed towards ! If punishes those who say that “there was no Armenian genocide” it will be a shameful historical document and permit us to perceive the new realities of the world.

is getting ready to retaliate against if it turns the denial of the “Armenian Genocide” into a crime. Even if we assume that the EU politicians and elites are not so stupid as to take steps that will push away from , it seems inevitable that Turkey-EU relations will go through a tense period in the future.

The Turkish author Orhan Pamuk, whose trial on charges of “insulting Turkishness” was dropped earlier this year, has won the 2006 Nobel prize for literature.

The Swedish Academy praised the author's work, which includes the bestselling novels “Snow” and “My Name is Red” and a memoir of his home city, Istanbul, saying that “in the quest for the melancholic soul of his native city [he] has discovered new symbols for the clash and interlacing of cultures.”

Pamuk's work, which has achieved both critical and commercial success in and beyond, examines questions of identity, and explores the transformations of modern Turkish society.

The announcement by Horace Engdahl, head of the , in drew a brief but intense round of applause.

At 7-1, 54-year-old Pamuk was third favourite with bookmakers Ladbrokes in the run up to the prize, after the perennial Nobel contender Ali Ahmad Said, the Syrian poet better known as Adonis (3-1) and the American author Joyce Carol Oates (6-1).

The award follows last year's decision by the Academy to honour the playwright Howard Pinter, who used his acceptance speech to launch an attack on foreign policy.

Newer PostAra Baliozian: words with meanings
Older PostMajor feasts and commemoration days of the Armenian Church for the calendar year 2007