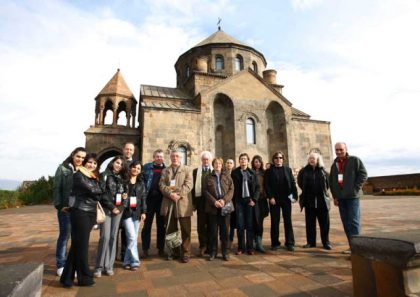 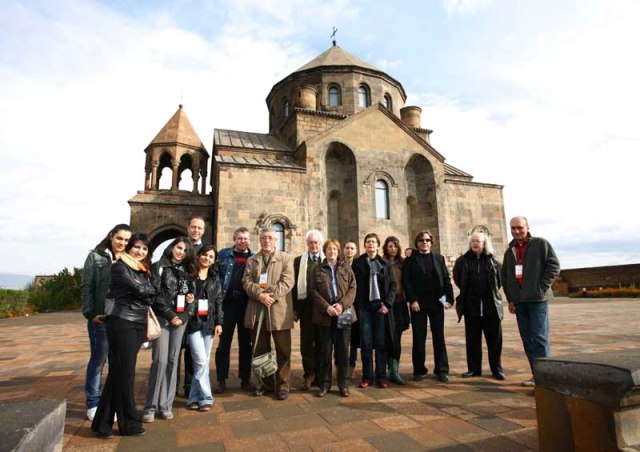 A group of 15 writers from several European countries were invited to Armenia from 19-28 November 2011 under the “Literary Ark 2011” program organized by the Armenian Organization for Cultural Cooperation with Foreign Countries and the Ministry of Culture.

The writers were introduced to the history, traditions, culture and contemporary life of Armenia. They attended discussions related to literature and culture.

The program was a prelude to next year's celebrations on the occasion of the 500th anniversary of Armenian printing. UNESCO has already declared Yerevan as the “World Book Capital 2012“.

On 20 October 2011 the writers visited Etchmiadzin and met His Holiness Karekin II, Catholicos of All Armenians. Arevik Samuelian, Deputy Minister of Culture briefed on the various events that have been organized by the collective efforts of the Armenian and foreign writers, directed towards the development of inter-cultural relations. The Catholicos expressed his appreciation for the cooperation between the European and Armenian writers and underlined that “writing and literature are the most unbiased indicators of the spiritual-moral state of society.” He wished that their impressions of Armenia would serve as a new source for future creative works.

Later the writer visited Zvartnots ruins and the grave of Saint Mesrop Mashtots, the inventor of Armenian alphabet, in the village of Oshakan.

In the evening they attended in Khnko Aper Library a presentation on “Homo Ludens” (Playing Man), a book written in 1938 by Dutch historian Johan Huizinga, which discusses the importance of the play element in culture. During the presentation Dutch writer Arlette van Laar and historian Serge van Duijnhoven explained about their vision of creative man and the world where he lives in.

After the presentation the writers visited Sergej Parajanov Museum and met there Armenian artists.