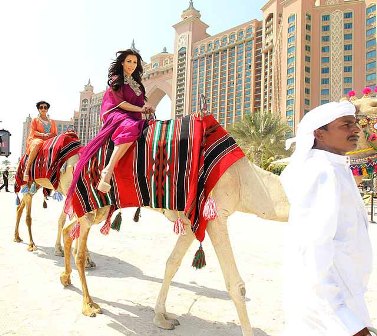 
Just 72 days after her wedding Kim Kardashian filed for divorce from her husband Kris Humphries.

UAE website kippreport.com saw Kardashian's wedding story as a kind of business deal. “Let?s talk money. Apparently, the Kim+Kris media partnerships for the wedding alone earned the couple close to $18 million – including a $2.5 million deal with People magazine,” the website said. “And that?s not it. Think about the extent to which ratings will unfortunately increase as millions of interested masses (the ones who were yelling their lungs out when Kim came to Dubai Mall) will not only watch but re-watch the series to find out what went wrong,” added the website.

Kardashian spent four of 72 days of her marriage with her mother Kris Jenner in Dubai, where she created great interest around her. Thousands of people followed here moves especially when she launched her special milkshake in the “Millions of Milkshakes” store in Dubai Mall.

In an interview with Kim Kardashian published before the news about her divorce, Nyree McFarlane of “Time Out Dubai” said: “The Kardashian clan lets it all hang out. So much so that, after watching them for four years (the first episode of Keeping Up with the Kardashians aired on October 14, 2007), many of us know more about them than we do our own families”. She goes on saying “this explains why this Armenian-American family is now rumoured to be worth more than Dhs3.6 billion (US$1b)”.

Kim arrived in Dubai on 12 October 2011. “Seriously the women in Dubai are so gorgeous”, “Wow, I'm in such awe over Dubai! My hotel is so insane… I'm obsessed with Dubai”, received her fans on twitter.

On the evening of their arrival she attended a VIP dinner with members of the Dubai Royal Family at a desert ranch.

On 14 October 2011 they attended the opening of the “Millions of Milkshakes” store in Dubai Mall, a business venture in partnership with “Emirates Hospitality Group”, the franchise holder in UAE.

Following the opening of the store, Kardashian and her mother were escorted to the Fashion Avenue to take part in a live interview “An Audience with Kim Kardashian”, with MBC TV hostess Joelle Mardinian (likewise of Armenian ancestry).

At another occasion, Kardashian and Jenner dressed colourful kaftans designed by Los Angeles based designer Miriam Rahali and rode the camels down the beach at the Atlantis The Palm.

In a statement to Grazia Magazine Middle East (19 October 2011, issue 288), designer Rahali said that the women of Dubai like Kardashian, among other things, for her “striking Middle Eastern features”.

Hello! magazine was invited to Kardashian's suite in the Atlantis The Palm. When


Sarah Walker of the magazine asked her about having children with her newly wed husband Kris Humphries she said: “Yes, it is definitely something I want to do and I can't wait” (Hello! Middle East, 29 October 2011, issue 337). This of course was before filing the divorce papers only recently.


Sarah Walker asked Kardashian about her feeling regarding the journey to a Middle Eastern location. “You are half-Armenian, yet this is your first time in this part of the world. Do you feel connected to the region?”, she asked. Kardashian replied: “It is truly the best place I have ever travelled to. I thought there would be such a difference between home and here, but to be honest, there are so many similarities. I have noticed the strength of the women in Dubai and I can really relate to that as we have very strong women in our family”.

In an interview with the Arabic magazine “Ara” (18 October 2011, issue 2) journalist Rasha Abdulmounem asked Kardashian: “Do you think your Armenian origin has played a role in feeling familiar with women in the Arab region, especially that you resemble them to a large extent in your silhouette and face features?”. Kardashian replied that this is somehow true as she feels great respect to the Arab women for their confidence in themselves and their beauty. She said that as an Armenian she considers herself as half Middle Eastern and would be happy to include Arabic abaya designs in her upcoming new fashion collection.

Gulf News reporter Muby Asger had a challenge: “We're determined – we really are – to get to the bottom of this delicious mystery. Just what is the big deal here? Why all this fuss about Kim Kardarshian, an Armenian-American whose baby-browns have taken the world by storm?”, he wondered (Gulf News, 13 October 2011)

After analyzing the Kardashian phenomenon Asger concludes: “So if Dubai goes ga-ga for the girl, who's to blame? She's a 21st century diva. A woman who's grabbed life by the delicates, who knows just what she wants, when she wants it, and how she wants it. It's no wonder that The Dubai Mall's going to be packed to the brim on Friday with fans, well-wishers, or even just the curious, all eager to catch a glimpse of this wonder-woman.”

Kim Kardashian and her mother left Dubai on 16 October 2011.

Crowds struggle to have a glimpse of Kardashian at the Dubai Mall: 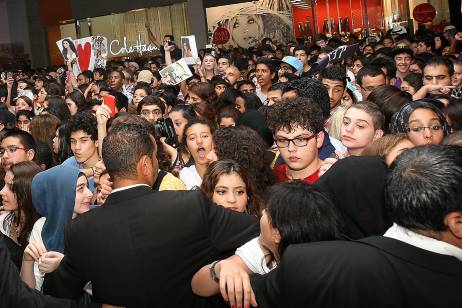