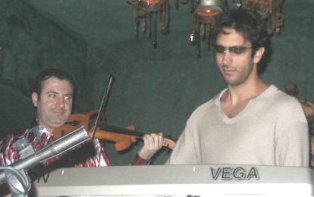 It was a grand opening night at the Dubai International Jazz Festival, which saw performances from Freddy Cole, Guy Manoukian, Kamal Musallam Trio and Dee Dee Bridgewater. People flocked from all walks of life to be a part of this much anticipated yearly event, which was held in the Dubai Media City amphitheatre.

The evening started at 7pm with a fine performance from Kamal Musallam Trio with Rony Afif on the drums, Elie Afif on the bass and Kamal Musallam playing his artistry on the oud. People were scattered about sitting on soft red bean-bags provided by Cacharel or on the grass chatting and having a great time. There were also benches and tables available for those who wanted a bite to eat.

Then came Freddy Cole. With a purple starry backdrop and green smoke that curled around Cole and his piano on the Skywards Stage, the audience sat mesmerised as they listened to the American legend. He might be in his 70s, but Cole's voice and presence on stage proved yet again that age doesn't matter. His captivating, smoky voice singing, “I'm so in love. There's nothing in life but you” was exactly the swinging jazz sound the audience was craving. His raspy whispers of love singing a Lionel Richie song got the audience whistling and clapping. And as he occasionally glanced into the crowds with a cheeky grin while biting his lower lip in passion, it was obvious that he has surpassed the title of just being Nat King Cole's younger brother. Here was a true jazz legend.

By the time Freddy Cole had finished his show the atmosphere was lively and an amazing energy was in the air. People wandered over to the Cadillac Stage to watch the next act – the young and popular Guy Manoukian. The Lebanese singer with Armenian origins has been playing classical piano since he was four years old. He was on fire and with his 8-person band, he more than blew the crowd away. The music, which Manoukian himself says is a fusion of Oriental and Arabic with rock, jazz, blues, classical and funk, got everyone up from their chairs to dance. Manoukian, whose onstage outfit was a red T-shirt and jeans, played his piano with intense passion. There were no words, just music. Half way through the show he finally spoke to the audience – albeit with a little microphone confusion – and introduced his musicians.

On came a guest singer, who with a raw and deep voice sang a traditional Armenian song. After the show, Manoukian who has played in Dubai many times before, said, “I just wanted to do one song to add a little bit of my Armenian heritage. I did it to make one point – that music has no boundaries. 99 per cent [of the audience] didn't understand what he was saying, but it was nice for the ears. When you have a good sound, then it doesn't matter.”

Manoukian, who was pleased with the show, said: “The audience was amazing, they were really communicating with me. I was glad to keep them excited and stay unpredictable throughout the concert. I wanted to leave my set on a high, and I think I did the best I could do today.”

The amphitheatre was packed now. Everyone was in a great mood, and as the much anticipated performance by American diva Dee Dee Bridgewater kicked off, people started dancing and grooving to the music. Dee Dee's music is completely African orientated. A few years ago she started a quest to discover her African heritage and now embraces Malian music as the connection to the 'motherland'. With wrenching emotion in her face, Dee Dee sang about Africa and kept the audience captivated till the very last note.

The Skywards Dubai International Jazz Festival 2007 (S-DIJF), which took place 8-10 March 2007 in Dubai's Media City, brought jazz fanatics from all over the UAE, the GCC and from Europe, three spectacular nights of quality music and performances, complimented by a magical atmosphere and a stunning set-up, and has left people euphoric and hungry for more.

“On the first night we had a crowd of 6,500 fans, 9,000 attended the second night of the event, and an incredible crowd of 9,500 attended the final night of performances.” Said Anthony Younes, managing director of Chillout Productions, founders and organizers of the Dubai Jazz Festival.

Guy Manoukian performs on the first night
Guy Manoukian, the charismatic, Armenian origin, Lebanese born composer, stormed the Cadillac stage with his unique style of classical jazz/oriental music. Manoukian enthralled the strong Lebanese contingent and others with cover versions of Fairouz and traditional Armenian songs ?jazzed up? (if you?ll pardon the pun) with catchy upbeat rhythms that had people literally dancing all around; these were featured alongside several of his own compositions. Manoukian was called back on stage to perform another number that kept the crowd applauding until long after the stage lights were extinguished. 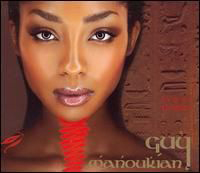 A Profile of a Lebanese Musician

The German philosopher Friedrick Neitshe once said 'Life without music would be a mistake'. Indeed, for what more beautiful art could there be? On the occasion of the 'Fete de la Musique' celebrated today in Lebanon and around the world, we shed the light on a young Lebanese musician who stands out among musicians because of his unique talent and dedication. The story in this report.

This is a story of a youth with a passion. This is the story of man whose dedication has taken on him on a magical journey in the winds of creation. It is the story of Guy Manoukian, the Armenian Lebanese musician, who has made his way through the world of music to become on of the youngest re-known composers of our nation. Welcome to the world of Guy Manoukian, a world where talent, hard work and mostly faith, have made a young man's dream a reality.

Music has been Guy's sweetheart ever since early childhood years. Starting playing the piano at the age of four and composing music at the age of eight, Guy has developed a unique style of music, which he describes as 'New Lebanese.' The reason why he labels it so, is because it is not pure Arabic nor is it pure European. It is a mixture of many cultures of many schools and many trends.

'When you are living in Lebanon, you are exposed to many kinds of music. I'm Lebanese of Armenian origin, so I have a Lebanese culture and an Armenian culture….'.

When talking to Guy Manoukian, one finds himself before an artist with the heart of a musician but with the mind of a businessman. This characteristic is due to the fact that Manoukian had previously studied law and played with a professional basketball team. He said law taught him discipline, while Basketball taught him teamwork. However music remains his strongest passion, his full time dedication and main source of living. Guy's musical passion has brought him many awards and distinctions, which are the fruit his creativity and hard work. He could succeed at what he does because he loves what he does and, as he says, leads a normal life.

'Life with its failure and success, all its problems and bliss is the main sources of inspiration.'

Guy's music appeals to all age groups. And the place, which he cherishes the most, is the stage. It is his second home if not his first.

'I am a performing artist not a studio artist. I love people when I'm on stage, I take a lot of their energy and this helps my performance. The feeling is indescribable. The feeling when you can control the masses with your music, that's amazing'.

Manoukian urges Lebanon's youth to have faith in their potential and take risks, because as he says, the biggest risk is that when they don't risk at all. As one goes step by step, so he puts it, the top gets nearer and nearer. Indeed, the proof is that Guy is on his way to America's movie industry. It might not be too long before we see another Lebanese composer in Hollywood's fame halls.

Mosaic features selections from daily TV news programs produced by national broadcasters throughout the Middle East. The news reports are presented unedited and translated, when necessary, into English. Mosaic includes television news broadcasts from selected national and regional entities. Some of the broadcasters are state controlled and others are private networks, often affiliated with political factions. These news reports are regularly watched by 280 million people in 22 countries all over the Middle East.