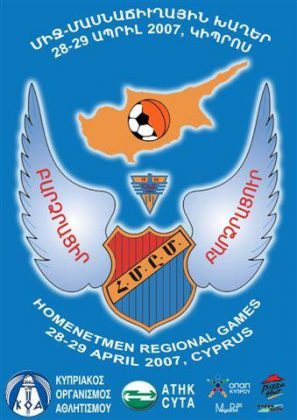 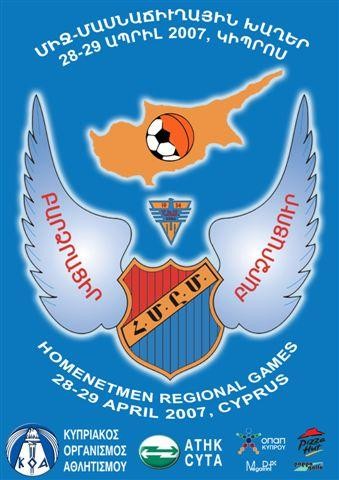 Preparation in full swing for the HMEM. Regional Games in Cyprus

HMEM-AYMA (Cyprus) is performing the final touches for what is destined to be one of the most active and exciting weekends in the recent history of our community. More than 100 youths, members of HMEM men's football and girls' basketball teams will be arriving to Cyprus to take part in the HMEM Regional Games organised by the Cyprus chapter of this worldwide Armenian sports organisation.

AYMA's football team is not a new participant in HMEM games. Its first participation was to the 6th Pan-HMEM games which took place in 2001, in Beirut, Lebanon. Bodigian's boys, having Andrew Konyalian as Captain, will be called to play host and gain a ticket to the finals.

All are due here with hopes of scoring success in the sports field, as well as forging ties with their brothers and sisters of AYMA, which rejoined the HMEM family in recent years.

Speaking to Gibrahayer, HMEM-AYMA president Dr. Antranik Ashdjian stressed: “Our aim is to give Armenian-Cypriot youth and our community in general, the opportunity to acquaint with the sports and social privileges which come with our membership in HMEM. We are at a geographical position that allows us to become a centre-point and not the isolated, closed and introverted society of the past.”

“An unforgettable weekend”
The weekend of 28th and 29th April 2007 will indeed be a unique one. Arrivals will start as early as Thursday 26th April. “Our guests will be here to interact with our youth, and our Community members. They are NOT going to be anyone's private or exclusive guests, to be ferried around secretly or to private functions. Every function we organise, every excursion, shopping spree, lunch or dinner, may be joined by our community's members. That is the whole aim. Interaction. Interaction. And more Interaction,” Ashdjian pointed out.

Friday (27 April 2007) will be dedicated to excursion and/or shopping, while the main sports events will take place on Saturday (28 April 2007).

“Having four teams in each sport makes it easier for us to hold a two-round competition. We want the games to end in one day, so that all our marzigs can freely participate and enjoy themselves at the KEF we have in store for Saturday evening.”

Semi-finals will take place concurrently on Saturday morning, while the basketball and football finals scheduled for the afternoon will be kept apart so as to encourage spectators to be present at both.

The evening KEF at “Yitonia ton Asmaton” in Aglandja (Nicosia) will include the presentation of the Cups to the winners of the games. The highlight will come when Hratch Gaydzagian, accompanied by Seto & Shake Baghdassarian and Vahe Simonian, will take the stage and lead us into a real KEF. “We have tried to book as large a place as possible, with the best price we could get, so that more people can participate. How many times do you get the opportunity to be on the same dance floor with 100+ Armenian youths from other communities?” said Ashdjian, reminding that booking in advance would be a wise move, bearing in mind the response from Armenian Cypriot youth initial responses.

Sunday will include an official visit of all the participating delegations to the Armenian Prelature and the Armenian Genocide Monument, followed by a BBQ Party at AYMA. While in the afternoon all guests will participate in the ARF-Dashnaktsoutiun Day celebration at the PASYDY Amphitheatre.

Teams will begin departing on Sunday evening, with remaining ones having excursions or other activities on Monday, again with the participation of community members.

We are certain, it will be a weekend that none of us will forget.

Sum-up of events:
28 and 29 April 2007 – HMEM Regional Men's Football and Ladies' Basketball Tournament hosted by HMEM-AYMA, with the participation of the regions of Lebanon, Syria, Kuwait, Jerusalem and Cyprus.

28 April 2007, at 9:00 pm – Armenian Kef at “Yitonia ton Asmaton” in Aglandja – Nicosia with the participation of athletes and guests from HMEM regions. Music by Hratch Gaydzagian and Shakeh Baghdasarian accompanied by Vahe Simonian and Seto Baghdasarian. Entrance is ?12 (including open buffet and drinks) and is open for all members of the Armenian community of Cyprus.

In the last 5 years there were no direct flights between the Kuwait and Cyprus. Fortunately enough, Jazeera Airways, the low cost carrier of Kuwait has started direct flights from Kuwait to Cyprus in March 2007.

This move has benefited the Armenian community and enabled the youth to participate in the HMEM Regional Games. About 25 Kuwaiti Armenian youth will arrive Cyprus later this month and will participate in basketball and football games and in all the associated social activities (see description above).