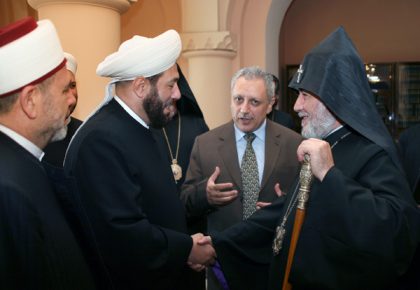 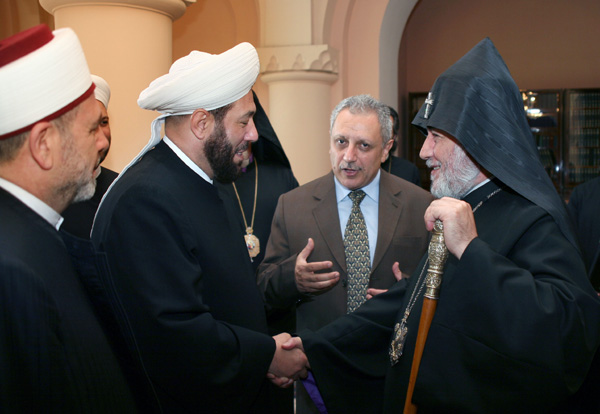 In continuation of the unprecedented inter-faith and inter-religious dialogues and visitations during the pontificate of His Holiness Karekin II, His Excellency Sheikh Ahmad Badr Ad-Din Hassoun, the Mufti of Aleppo and spiritual leader of the Muslims of the , traveled to last month upon the invitation of the Catholicos of All Armenians.  The visit of the Chief Mufti of occurred less than one year following the visit of the Chief Rabbi of to Holy Etchmiadzin as a guest of His Holiness.

Arriving in Holy Etchmiadzin on September 2, the Chief Mufti was received by the Catholicos of All Armenians in the Pontifical Residence.  Welcoming Sheikh Ad-Din Hassoun to the headquarters of the Armenian Church, His Holiness stated, ?We are most happy that your visit to has given us the opportunity to renew our friendship and express our respect for the Syrian people.?  His Holiness, recalling his visit to in 2001 where he was very warmly received, continued, ?It was a great consolation for us and our people to witness the love and respect of the Syrian people and authorities when we visited Der Zor.  We and our predecessors have always appreciated the brotherhood and friendship of the Arab peoples, which was most highly manifested in the years following the Armenian Genocide, when your nation and many others received the survivors and their descendants in your hospitable lands, giving them the opportunity to reestablish their lives and families.?

Sheikh Ad-Din Hassoun thanked the Pontiff of All Armenians for the warm welcome, congratulating him and all Armenians throughout the world on the 15th Anniversary of Independence of the .  The Chief Mufti spoke of the good relations between and and added that the people of received the Armenians fleeing genocide not as immigrants, but as brothers.  Sheikh Ad-Din Hassoun also stressed the necessity for peace and tolerance in the world, and the cooperation and ever-present communication among the leaders of world religions.  ?The past has given us a history of blood and suffering.  The future must hold a different path for mankind?, stated the Mufti.

As part of the three-day visit of the Syrian religious leader, the Chief Mufti and his delegation also visited the Tsitsernakaberd Memorial and Museum of the Armenian Genocide in .  In tribute to the 1.5 million victims of the first genocide of the 20th century, Sheikh Ad-Din Hassoun stated, ?If nations followed their religions, such crimes would never happen??