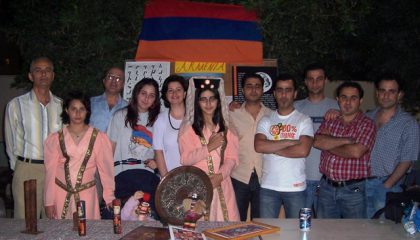 The International Food Festival is an event held every year at the in . It is an open day activity for all students, parents, teachers and visitors to taste free food prepared by representatives of different countries and cultures. The school itself has students from 60 nationalities, including few Armenians.

On 23rd March 2006 Ankine Havanjian-Hagopian and her team of family members and friends volunteered to represent in the Food Festival. In the pictures you can see a group of Armenian youngsters who helped Ankine to carry the food and artwork to the school yard.

As far as the Armenian cuisine is concerned, Ankine thought of making something different than the usual dolma and harissa, which are known dishes for the Arabs. So she made ich, zeytov sarma, gata and cooked mamounya right on the spot!

Some of the visitors had very vague idea about as a country and people. The Festival was a good opportunity to combine cuisine with presentation on the country. Armenians should take advantage from every opportunity to introduce themselves to other nations, now that after the it has become relatively easier to refer to as an existing country, with flag, statistical data, geographical boundaries, political development, tourism prospects, etc. Ankine prepared a large board behind her with the map of and Armenian Alphabet, plus some historical pictures (see photo).

Ankine hopes that next year (March 2007) she will be able to organize a bigger stand with the help and commitment of other members of her immediate team and Armenians who reside in .

Participating countries in the Food Festival:

1- The Armenian community team in the International Food Festival in