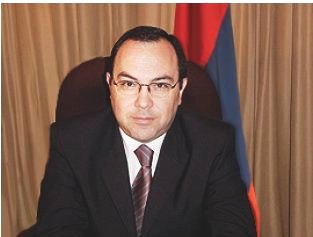 CELEBRATING its 15th Independence Day today, is looking to the future with hope and resolve. An emerging entity in the international political scene, has chosen a suitable economic model. Being a landlocked country, has opted for the kind of industries appropriate for its difficult geographic conditions.

“We have only two links to the outside world – and – so we've adapted our economic policies using these two links,” says 's Ambassador here.

In adapting their economic policies to these two links to the outside world, the Armenians have also opted for the economic activities suited to the local geography as well.

They have banked on information technology as the engine of their economic growth. Now there are around 120 local and international IT companies operating in .

“We have the necessary human resources and sound policies, so why shouldn't we be advanced as far as information technology is concerned?” asks Karapetian. IT accounts around 5 per cent of 's total exports. These exports go to Europe and also the .

The other option has settled on is diamonds. The Armenians import diamonds from all over the world, polish them and then export them again.

Karapetian, who had hardly finished his university studies when his country gained its independence, has big dreams for more cooperation between and . This is his first diplomatic post as Ambassador. To him, “A first post is like your first love, the one you can never forget.”

What makes it a little bit easier for Karapetian to implement his plans here is that relations between and are deeply rooted in the history of both countries. The Armenians first came here back in the days of Mohamed Ali.

There was an even bigger influx of them after World War I after the Turkish pogrom. Nowadays, there are around 10,000 Egyptians of Armenian origin living in . Some of them have even become celebrities like the famous actresses Libliba, Nelly and Mimi Gamal.

Karapetian wants to turn relationship between and , which is already described as 'more than excellent', into a strategic one. Trade between and stands at US$2 million. Karapetian is not happy about this at all. But he thinks this can increase, simply because the figure was even less when he first came to 18 months ago.

“There are many fields where there could be fruitful and very successful cooperation between and ,” Karapetian told The Gazette.

The fact that there is no direct means of transportation between and is an obstacle to increasing the volume of trade. So Karapetian will try to convince EgyptAir officials to start direct flights between and . “It would only take two-and-a half hours to fly from to

,” he said. “Direct flights would be an important way of increasing trade exchange between our two countries.”

Karapetian believes that and need to concentrate on the IT, agriculture and energy sectors. “We can exchange IT expertise with ,” he said. “We can also bring some of our agricultural products here.” He added that he would speak to the Ministry of Oil in , to discuss an agreement for delivering Egyptian natural gas to . “We also need gasoline from ,” Karapetian stressed.

Meanwhile, , whose capital is almost 2,800 years old, strives for a bigger cultural role in the world. This is a country that Karapetian describes as “having its head in Europe and its soul in the Arab region and the .”

Click to get the article as a downloadable PDF document: