French President Jacques Chirac called on on 30 September 2006 to “recognize its past” in connection with the mass killings of Armenians in the early 20th century and to acknowledge them as genocide.

“Should recognize the genocide of to join the European Union?” Chirac asked, echoing a question posed by a reporter at a joint news conference with President Robert Kocharian. “I believe so. Each country grows by acknowledging the dramas and errors of its past. Can one say that , which has deeply acknowledged the holocaust, has as a result lost credit? It has grown”, he said.

is interested in a predictable and democratic state can become, President Kocharian said at the joint press conference with the French President when responding to a Le Monde reporter's question. In his words, the talks on 's accession to the EU should give the answers to urgent questions including the Armenian Genocide issue.

On the same day Chirac, accompanied by his wife Bernadette, Foreign Minister Philippe Douste-Blazy, Presidents of the French Senate and National Assembly, members of the governmental delegation, attended a solemn ceremony at the , where he placed flowers and was greeted by an honor guard playing mournful music before being taken on a tour of the “.” He made a note in the Armenian Genocide Commemoration Book by writing a single word “Remember”. He planted a fir-tree on the alley leading to the Memorial.

According to Tuluhan Bahar of “The Journal of Turkish Weekly” (01 October 2006) Chirac gave his “full support to Armenian claims against “. Tuluhan repeats the known Turkish accusations regarding the events that took place 91 years ago: “As a result of riots and occupations the Istanbul Government took the decision of Relocation (tehcir) of the Eastern Armenians … Thousands of Armenians died due to the ethnic attacks from the Kurdish tribal gangs, bad whether, famine and epidemic diseases”. The official Turkish version blames all parties except the real perpetrators.

On 01 October 2006 Jacques Chirac met in Etchmiadzin with Catholicos of All Armenians Karekin II. During the meeting the Catholicos informed Chirac that the representation of the in will soon be reformed into a Diocese. He thanked the French people for hosting Armenians who survived the Genocide in 1915 and for recognizing the Armenian Genocide.

Chirac in his turn said, “Naturally, should have been among the first countries to recognize the Armenian Genocide. I hope that owing to denouncing similar crimes, they will not be repeated in the future”. Chirac visited the Cathedral and the Treasure House of Etchmiadzin.

Taha Akyol of Turkish daily “Milliyet” describes the remarks of Chirac as the “Armenian Games of the Dinosaur” (Turkish Press.com 02 October 2006). According to him “The tired old dinosaur [Chirac] who can?t grasp the understanding of history, science and freedom in today?s world is behind old-fashioned political games. He?s taking steps to win over for in the Caucasian region.”

While primarily serving as the inauguration of “The Year of Armenia in , Chirac's visit was also an occasion to address regional issues, “Today I want to believe that it?s the time for peace. I want to believe in that, as I know what war means,” said Chirac, reflecting on the Armenian-Azeri conflict, at one of the meetings. He stated that has done its best for over 10 years to assist settlement of the Karabakh conflict, and that it's wrong to think now that conflicts are to be solved by force.

Parallel to the year-round Armenian Year activities in , “The Days of France in ” were officially inaugurated on 02 October 2006. Some ten art and photo exhibitions, several theater performances, a festival of French films, classical music concert, as well as fashion shows are planned in Yerevan during the coming period.

On the other hand, the Council of Europe's parliamentary Assembly President Rene van der Linden criticized on 02 October 2006 the suggestions by Chirac that should recognize World War I era massacres of Armenians as genocide if it wanted to join the European Union. “One can't change the rules in the middle of the game,” he told reporters, referring to EU membership conditions for . 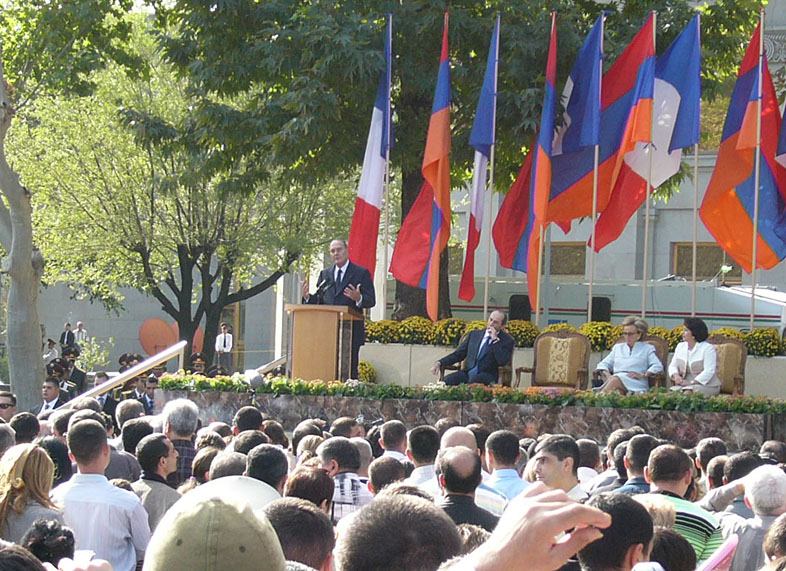 Suat Kınıklıoğlu of the “Turkish Daily News” (03 October 2006) tries to analyze Chirac's visit by and sees in Chirac's declarations a sign of Turcophobic euphoria. “In the final analysis, Chirac's visit to may provide a photo opportunity for Kocharian, a couple of days of media attention and political satisfaction for the diaspora. But what real good is in it for ? What does such a provocative visit accomplish in terms of the resolution of the Karabakh conflict or the increasingly doomed isolation of ? … What does hope to achieve from sowing the seeds of antagonism and provoking in an increasingly shrinking world that has brought civilizational discord to the doorstep of ? This is unclear. What is clear though is that has become the leading Turcophobic state in “, she says.

The Associated Press reported on 03 October 2006 that said it was out of the question to accept a call by French President Jacques Chirac who urged over the weekend to acknowledge the mass killings of Armenians in the early 20th century as genocide. 's Foreign Ministry said in a statement that Chirac's remarks during a visit to on Saturday were “met with deep grief”.

Once more Mehmet Ali Brand is the best media personality who expresses the Turkish collective attitude towards the Armenians and the Armenian Genocide. It is worth to read his lengthy comment published in the 4 October 2006 issue of the “Turkish Daily News”. With his logic he urges his compatriots to adopt a new policy to “wipe away the stain of genocide”. To the question of how could the Armenians “deceive” the world with their Genocide “claims” he provides a self fulfilling answer: “Their numbers are few, but these guys have been working for 90 years to get acceptance of their claims”. He does not ask the question why would “these guys” work 90 years on a subject that was almost unachievable for decades and was even considered as a forgotten case. Let us read the complete article: