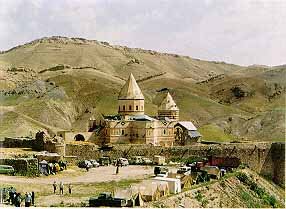 Deputy Head of Iran's Cultural Heritage, Handicrafts and Tourism Organization (CHTO) Taha Hashemi said that documents of three historical churches in Iran have been sent to the United Nations Educational, Scientific and Cultural Organization (UNESCO) to be registered in the world historical monuments.

Speaking on the sidelines of a meeting of the organization in Niasar, Kashan, on 04 October 2006, Hashemi named the three churches as; Thaddeus church known as “Qara Kelisa” (The Black Church), Stepanos and Zorzor churches.

According to the Armenians, Thaddeus church is one of the oldest churches in the world. It is located in the West Azerbaijan province (in ). Hashemi said that Thaddeus was one of the disciples of Jesus, who came to the northwestern part of , and . King of Armenia ordered Thaddeus and his 3,500 followers, including the King's daughter Sanadoukht to be killed. Thaddeus was buried in the venue of the Qara Kelisa area. Three centuries later, people built a church on the grave of Thaddeus and since then Armenians have held ceremonies there annually (see photo).

Stepanos church is located in the and has equally old history.

Zorzor church is located in the province, and is 700 years old. This church was relocated in 1997 because of the building of a big dam in the area and was rebuilt on the top of a hill.

The Iranian official said all documents and maps have been sent to the UNESCO and its experts are to visit the venues soon, and then the churches will be in the world heritage list in 2008.

So far, 44 churches from 500 existing churches in have been registered in the national heritage list.

Note: The present day St. Thaddeus Monastery is built on a copied plan of Etchmiadzin cathedral in the XIIIth-XIVth centuries. Renovations were made in the XIXth century and (more recently) in the last few years.