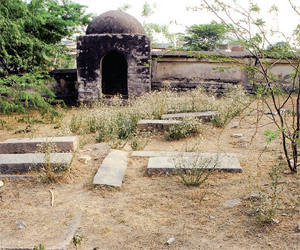 HYDERABAD: It is perhaps the last known trace of the Armenian connection with the city of Hyderabad.

And now it is almost on the verge of being erased erased from the city?s historic map.

Yes, the Armenian cemetery located at Uppuguda* (known as Opiguda in the colonial times) is reduced to a mere dumping zone and a place where people relieve themselves.

Armenians came into India as traders through the overland route much before the advent of European traders into India, in fact seven centuries before Vasco-da-Gama reached India.

A historian Mesrovb Jacob Seth in his seminal work Armenians in India has noted that 19 Armenians including two priests Rev Johannes (1680) and Rev Simon (1724), were buried in this now deserted cemetery.

And the cemetery is not confined to Armenians alone.

?With no English graves of 17th and 18th century seems to have existed, even the Dutch used the Armenian cemetery till they acquired their own cemetery in the year 1678,? B Subrahmanyam, a retired deputy director of AP Archaeology Department told Expresso.

Referring to a study done by Dr V Nersessian, he pointed out that there was considerable Armenian population in Hyderabad and the community was sent a Pontifical Bull from Holy Etchmiadzin, the spiritual centre of Armenian Chursbiantuow in Soviet Armenia.

Realising the importance of the Armenian cemeteries and churchyards, which are the only attested sources of their presence, the D epartment of Archaeology has declared the Uppuguda site as a protected monument under the Archaeological Sites and Remains Act, 1960. But due to sheer negligence, this historical churchyard is reduced to a dumpyard full of liquor bottles and human excreta.

When the sorry-state of affairs was reported to the Director of Archaeology and Museums Department P Chenna Reddy, he said that they have included this cemetery in the colonial heritage monuments preservation project in Hyderabad.

?The cemetery has been neglected for more than seven years. Before the Central Government releases funds for this project, the department is chalking out a plan to clean the site soon,? an Archaeology Department official said.

One can only hope that the condition of this cemetery, where the Armenian-Hyderabad connection is etched, would be improved as soon as possible.

* Uppuguda is one of the old suburbs in Hyderabad, India. It is part of the old city of Hyderabad (Wikipedia).

Photo: One of the gravestones at the Armenian cemetary in Uppuguda.