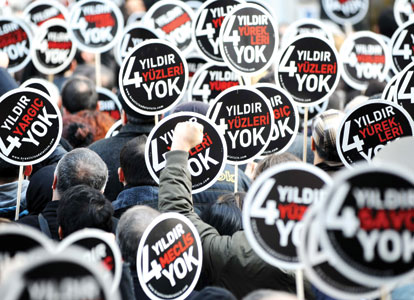 Thousands of people gathered Wednesday to commemorate slain journalist Hrant Dink in front of the Istanbul office building where he was assassinated four years ago, an event that united a diverse and colorful coalition.

Crowds have gathered on the same spot each year since Jan. 19, 2007, when the Armenian-Turkish newspaper editor was shot in the back by confessed triggerman Og?n Samast. Thousands of people came together that day as photographers were still taking shots of his body, lying in the street covered with newspapers.

Four years later, they united under the same slogan ? ?We are all Hrant, We are all Armenians? ? as at the original gathering, and with the same demands for the justice they say has been denied.

?We know the ones who did it, the ones who made them do it and the ones who covered it up are in the state,? journalist B?lent Aydın said to the crowd assembled on a sunny winter day in Istanbul?s Osmanbey district. ?Let the ones who said ?kill? be put to trial.?

Though last year?s commemoration drew limited participation due to snow, a larger crowd joined this year?s event, with one group gathering at Taksim Square and another in the Şişli district. Both marched to Osmanbey and the office of the weekly newspaper Agos, founded by Dink and published in Armenian and Turkish. By 2 p.m. the street was closed to traffic. Flowers and pictures in a heart-shaped wreath were laid at the spot where Dink was shot. At 3 p.m., the time of the assassination, the crowd was called to silence and a recording was played of Dink?s voice talking about the Armenians of Anatolia. Many in the crowd could not back hold their tears.

During the commemoration ceremony, people handed out banners reading, ?There has been no Hrant/prosecutor/state/Parliament for four years.? Relatives of slain intellectuals, journalists, artists and other victims of hate campaigns such as the one Dink had been subjected to before his death came to show their support. ?We have gathered here for the fourth time, as a big family. We are relatives now,? N?khet İpek?i, the daughter of assassinated journalist Abdi İpek?i, told the crowd. ?As our sister Rakel [Dink, Hrant?s widow] said, they made us relatives in suffering.?

Prior to dissembling, the crowd was asked to show up at the next hearing of the murder case in February and to join the torch-lit march from Taksim Square to T?nel Square at 7 p.m. Police with tear gas and riot shields were on high alert during the afternoon event, but the commemoration ended without incident.

Dink was a Turkish citizen of Armenian origin who had been working to reestablish ties between Turks and Armenians which have been troubled since the alleged killing or deporting of hundreds of thousands of Armenians during the last years of the Ottoman Empire. His assassination in 2007 hit the country hard and has brought together people from different backgrounds to demand that all those involved in his murder be brought to justice.

The Dink family has made a new plea for police and gendarmerie officials who were left outside the scope of the investigation to be questioned in light of the recent European Court of Human Rights decision finding Turkey guilty of not protecting Dink and his freedom of speech, and not properly investigating civil servants suspected of either neglect or direct involvement in the murder.

?The state needs to put itself on trial and it does not. It is that simple,? ?mit Kıvan?, a journalist, director and member of the ?Friends of Hrant Dink Platform? told the H?rriyet Daily News & Economic Review.

?[Every demand] is being denied. Nobody who needs to be questioned has been. There are people who are still on duty. This [murder] has gone into the record as done by the state,? Kıvan? said, adding that even an ordinary citizen is able to explain how the murder process developed but that does not matter to the court or to the state. ?They do not care,? he said.