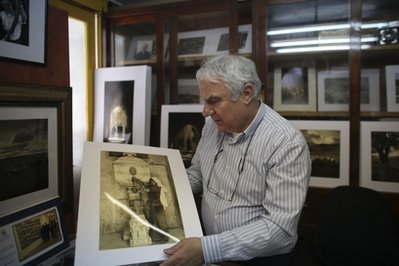 JERUSALEM ? One of the four quarters of old Jerusalem belongs to the Armenians, keepers of an ancient monastery and library, heirs to a tragic history and to a stubborn 1,600-year presence that some fear is now in doubt.

Buffeted by Mideast forces more powerful than themselves and drawn by better lives elsewhere, this historic Jerusalem community has seen its numbers quietly drop below 1,000 people. The Armenians, led by an ailing 94-year-old patriarch, find themselves caught between Jews and Muslims in a Middle East emptying of Christians, and between a deep sense of belonging in Jerusalem and a realization that their future might lie elsewhere.

“Very few will remain here if it goes on like this,” said Kevork Kahvedjian, a Jerusalem storeowner.

Kahvedjian sells vintage black-and-white photos of the Holy Land from a store founded in 1949 by his father, who arrived in Jerusalem as a child after mass killings of Armenians under Ottoman rule during World War I claimed his own parents. Today, Kahvedjian said, he has siblings in Canada and the U.S., a son in Washington, D.C., and a daughter who plans to move away soon.

The insular world of the Jerusalem Armenians is reached through a modest iron door set in a stone wall.

The door, locked every night at 10:30, leads into a monastery compound that is home to a contingent of cloaked clergymen and also to several hundred Armenian laypeople: grandparents, parents and children, living in a warrens of small apartments alongside their priests in a self-contained outpost that has existed here, in some form, at least as far back as the fifth century A.D.

Also inside is a library, a health center, two social clubs and a school where each grade now has an average of only six or seven pupils.

“We worry about this, of course. But we haven't found a solution,” said Samuel Aghoyan, 71, one of the community's senior priests.

On a recent afternoon in the Armenian monastery's nerve center, the medieval cathedral of St. James, clerics in black cowls chanted under dozens of oil lamps suspended from the vaulted ceiling. Next to a priest waving a censer was an inlaid panel concealing the entrance to a staircase ascending inside the wall to the church's second floor.

The monastery, led by the patriarch Torkom Manoogian, 94, guards other secrets. It holds the world's second-largest collection of ancient Armenian manuscripts, 4,000 texts guarded in a chapel opened only once a year. It also owns the Bible of Keran, a gold-covered manuscript named for an Armenian queen and kept in a treasury whose location the priests will not divulge, and the staff of King Hetum, made from a single piece of amber and revealed to the public for a few minutes every January.

The several dozen priests, most of whom are sent to Jerusalem by the church from elsewhere, will remain, as will their edifices and relics. But the community itself, made up of laypeople subject to the pressures and pulls of this world, may not.

Aghoyan arrived at the monastery as a 16-year-old seminarian in 1956 from Syria, where his parents had fled from Turkey. He found the Jerusalem monastery crowded with families, most of them refugees or descendants of refugees who escaped the killings.

Many international historians say up to 1.5 million Armenians were killed by Ottoman Turks around the time of World War I, which they call the first genocide of the 20th century. Turkey disputes this, saying the death toll has been inflated and those killed were victims of civil war and unrest as the Ottoman Empire collapsed.

The resulting refugees swelled the small existing community of Armenian priests and laymen, and by the time Jerusalem was split between Jordan and Israel in 1948 the Armenians numbered over 25,000, by some counts. They were traders and craftsmen whose distinctive mosaics of painted tiles remain one of the city's signature design features.

After 1948, with the city divided, the Old City under Jordanian control and economic prospects bleak, most Armenians left, joining thriving exile communities in places like Fresno, California, and Toronto.

The Armenians, along with Arab residents of east Jerusalem, were given residency rights in Israel, and some have since applied for full citizenship. But the community has tried to plot a neutral course in a place where that is difficult. Ties with both Israelis and Palestinians have been tense at times.

Israel's Interior Ministry does not have statistics on the number of Armenians. Community leaders like Aghoyan and Tsolag Momjian, the honorary consul of Armenia, agree there are now fewer than 1,000 in the city.

The slow decline of the Jerusalem Armenians reflects a broader shrinking of the Middle East's ancient Christian population. For much of the past century, Christians in Lebanon, Iraq, Egypt, the Palestinian territories and elsewhere have been moving to the West, fleeing poverty, religious intolerance and violence like the anti-Christian riot that erupted this week in Cairo, leaving 12 dead and a church burned.

Young Armenians, expected to marry Armenians, are faced with a shortage of potential spouses. Because they are typically well-educated, fluent in English and have family connections abroad, they are equipped to leave. Those who do join a diaspora that numbers an estimated 11 million people worldwide and supports churches, community centers and at least a dozen international online dating sites with names like Armenians Connect and armenianpassion.com.

“Whoever leaves still dreams about Jerusalem and says they'll come back. But they won't,” Aghoyan said.

Others are more optimistic. Ruppen Nalbandian, 29, a community youth leader with a master's degree in neurobiology from an Israeli university, said the outflow has slowed. Of 11 students in his class at school, he said, only two have left. Ten men he knows have found brides in Armenia and brought them back to Jerusalem, he said.

Some in the community point to an unexpected boon in the form of Armenian Christians ? possibly more than 10,000 of them, though estimates vary ? who arrived in Israel as part of a mass immigration of Soviet Jews in the 1990s and were eligible for citizenship because they had a Jewish parent or spouse. Some have mixed with the established Armenian community.

Not long after the Armenians adopted Christianity in 301 A.D. in their homeland around the biblical Mt. Ararat, on the eastern border of modern-day Turkey, they dispatched priests to Jerusalem.

They have remained ever since, through often devastating conquests by Arab dynasties, Persian armies, mounted Turkish archers, Crusaders, the Ottoman Empire, Englishmen, Jordanians and Jews.

“As we have lived here for 1,600 years, we will continue to live here,” Nalbandian said.

Photo: In this photo taken Friday, May 6, 2011 Armenian Kevork Kahvedjian, displays a photo taken by his father, inside the Elia Photo Service shop that he owns, in Jerusalem's Old City (AP Photo/Tara Todras-Whitehill).