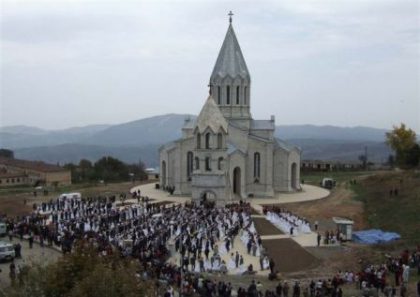 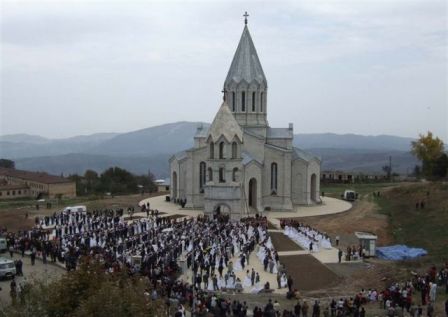 Medical services in Nagorno-Karabakh are struggling to cope with a surge in child births more than nine months after a mass wedding that was organized and sponsored by a Moscow-based Armenian businessman.

The Karabakh-born entrepreneur, Levon Hayrapetian, had 678 local couples marry in a single open-air ceremony on October 16, 2008 to assist in a government policy that seeks to boost Karabakh?s population and thereby make it less vulnerable in case of renewed war with Azerbaijan. Hayrapetian covered their wedding expenses and paid each couple $2,500 as a bonus.

The results of the extraordinary event can be observed at the sole maternity hospital in the Karabakh capital Stepanakert which is grappling with a higher-than-usual influx of women preparing to give birth. Doctors there had to cram extra beds into hospital wards and draw up waiting lists for delivery.

?We may now have as many as 14-15 births a day,? the hospital director, Gohar Hakobjanian, told RFE/RL. ?Last month we had a total of 192 births. We are experiencing difficulties.?

?Pregnant women are complaining about waiting lines,? she said. ?We are coping with that with extreme strains.?

The number of children born in Karabakh already rose by 16 percent to 1,306 in the first half of this year. ?The tough war years are gone, life has improved and people want to have more kids,? said Hakobjanian.

Material incentives offered by the Karabakh government to newlyweds are also a key factor behind the baby boom. The government pays 100,000 drams ($270) for a first and second child born in every family in addition to a one-off payment of 300,000 drams made to a newlywed couple. Families having a third child get 500,000 drams from the state.

?Judging from the indicators of the first seven months of 2009, the results of our policy have been satisfactory,? said Samvel Dadayan, head of the family department at the Karabakh Ministry of Social Security.

Official statistics show the number of marriages in the Armenian-populated region nearly doubling in the first half of 2009 after reaching the highest level in 20 years in 2008. The authorities in Stepanakert also reported a 29 percent drop in divorces during the same period.