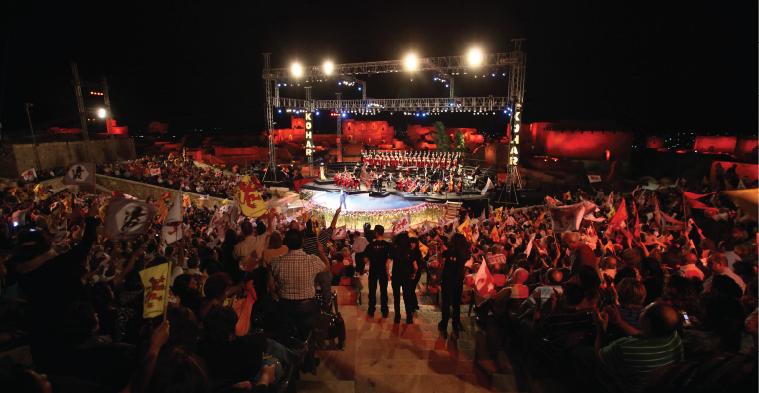 KOHAR Symphony Orchestra and Choir (frequently known as KOHAR) scored another roaring success on 09 July 2009 in the majestic setting of the Opera Theatre in Damascus, the capital of Syria.

Tickets sold out well in advance for this eagerly anticipated first appearance in Syria. Crowds were elevated with the exceptionally well performance and showed their heartfel appreciation with non-stop applause.

Kohar continued its tour in Syria and kept the audience busy in Aleppo for three consecutive nights, on 15, 16, and 17 July 2009, leaving its marks on the world-famous heritage site of the Citadel of Aleppo, on the backdrops of the ancient city's amphitheater. It was unforgettable experience as shown in the photo.

KOHAR of Gyumri (the northern capital of Armenia), is a popular orchestra founded in 1997 by Lebanese Armenian culture patron Harout Khatchadourian, who along with his family members cover the expenses of KOHAR, in memory of their late father Aram and in honor of their mother Kohar.

Consisting of over 120 musicians, solo singers and dancer, KOHAR quickly grew in popularity. Its first major concert tour was in the summer of 2002 in Cyprus and Lebanon. In Beirut, the well devised repertoire served as a distinctive cultural experience, drawing more than four thousand people at BIEL center. The collection of traditional and popular songs drew many into tears of nostalgia, reminiscence and pride.

In the following years, KOHAR appeared on stage in Istanbul, Moscow and major cities in North America.

KOHAR has been famous for its recordings of “All Time Armenian Favorites” DVD asnd CD. The DVD features a bilingual Armenian and English, multi-feature and stunning, visual and symphonic performance with many songs and dances and subtitled lyrics of the songs in Armenian and transliteration.

HAYASA Productions Ltd. is a Cyprus-based company established in 2003. Its main aim is to produce cultural and musical CDs and DVDs, from concept, organization, design, execution, as well as marketing and distribution. It exclusively produces, markets, and distributes the CD and DVD “All Time Armenian Favorites” by KOHAR Symphony Orchestra and Choir.

The aim of HAYASA Productions Ltd. is to make the Armenian language enter every Armenian home for the sole purpose of preserving the Armenian alphabet and culture for future generations. It has produced CDs and DVDs of performances by Koharapayl. In addition, it has produced Samvel Kalesdian's CD entitled “Hayr Im”, accompanied by Kohar Symphony Orchestra and Choir.

From KOHAR's event in Los Angeles

It was apparent, even before a single member of the KOHAR Symphony Orchestra and Choir arrived onstage Thursday at the Gibson Amphitheatre, that a special event was about to take place. The front edge of the stage was covered with a colorful garland of flowers, two pillars spelled out the word “KOHAR” and the stage was set for a full orchestra and a large choir.

Despite the setting, the first performer — Hamlet Tchobanian — was neither a musician nor a singer but a mime. His arrival announced by a loud cymbal crash, he lurked across the stage in classic, white-faced, Marcel Marceau fashion. Opening a pair of illusory gates, he majestically introduced the 130-plus members of the Armenian KOHAR Symphony and Choir.

Led by artistic director Sebouh Abkarian, his long white hair waving dramatically with each thrust of his baton, the Kohar players offered a buoyant waltz to begin a long, stirring evening of Armenian-tinged music. Here, as in many of the pieces to follow, KOHAR's sound and style often had the lightweight but entertaining quality of a summer pops orchestra.

As the mime-introduced opening implied, however, a KOHAR performance is more spectacle than concert. Most of the music was vocal, sung by soloists whose styles ranged from big-voiced operatic to international lounge. In most cases, the singers' numbers were enhanced by the engaging presence of eight female dancers led by the gorgeously lithe Sousana Mikayelian. Letters from the Armenian alphabet were spotlighted across the ceilings and walls, and the program climaxed with a burst of golden streamers flying out into the audience.

Much of the second half of the concert, in fact, was strongly oriented toward the predominantly Armenian crowd. Spirited patriotic songs, pop tunes and familiar traditional numbers drew an escalating response — hand-clapping, sing-alongs and enthusiastic shouts.

KOHAR was founded in 1997 by Harout Khatchadourian and his brothers, who entirely sustain the ensemble and its concerts. Named in honor of their mother, Kohar, the founders' goal with the ensemble is the “aim of reviving and promulgating the Armenian alphabet and culture.” KOHAR did that and more Thursday, positioning the capacity of Armenian music to reach out stylistically while retaining its rich creative identity.