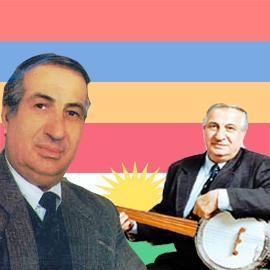 On 6 August 2009, Armenian musician Aram Tigran died in Athens, Greece. Born in the northeastern city of Kamishli, Syria in 1934, Tigran sang in Arabic, Armenian, Kurdish and Turkish. His father was a Genocide survivor. Tigran's interest in music and the oud began at the age of nine. In 1966 he moved to Yerevan, Armenia, and worked for Radio Yerevan for 18 years. After 1995, he moved to Athens. He is considered among the best of contemporary Kurdish singers and musicians. He recorded hundreds of songs in Kurdish and other languages.

His wish to be buried in Diyarbakir in the mainly Kurdish populated southeast Turkey was not fulfilled, as the Turkish authorities did not grant the necessary permission.

Thus, his funeral took place in Brussels, Belgium on 17 August 2009. A delegation from Diyarbakir, headed by mayor Osman Baydemir specially arrived in Brussels bringing soil from the graveyard in Diyarbakir to honor the wish of the beloved musician.

Baydemir expressed his sadness at not being able to bury Tigran in Diyarbakir. “It is not our shame, but the shame of those who made that decision,” he said.

Few days before his actual burial ceremony, the inhabitants of Diyarbakir staged a symbolic funeral on 12 August 2009, in the Armenian graveyard of the city, attended by the mayor himself. At the ceremony, people held posters saying in Kurdish and Armenian, “The people's nightingale has been left without a home.”

Firat Anli, member of the Democratic Society Party (a pro-Kurdish party) said, “If Tigran had been buried in this soil today, it would have made this place richer. Because we pulled out their roots in this soil and threw them away. Perhaps it could have been a kind of apology to Armenians and Assyrians and to all the people of the Mesopotamia area whose value we did not appreciate, and whose lives and cultures we targeted. With the person of Aram Tigran we would have had the opportunity to face the past in order to build a new future.”

Turkish Paliament member of Kurdish origin Aysel Tugluk said, “Tigran was an artist who protested, saying that all identities, all languages and all beliefs should be free. That is why this region, this society, the Kurdish people will not forget Aram Tigran.”

Wish to be buried in Diyarbakir

In June 2008, Aram Tigran attended Diyarbakir's 9th Culture and Arts Festival and stayed in the city for two months. He was able to visit Turkey because he had recently acquired Greek citizenship. Due to his ill health he performed only three Kurdish songs in the festival.

During his stay in Diyarbakir he had expressed the wish to be buried in the city. “It was the dream of the century to come to Diyarbakir. I always used to say, God, will I ever see the place where my parents lived before I die? Two years ago, after becoming a Greek citizen, I first came to Diyarbakir. I was very touched and wrote a song”, he said in an interview with Kurdish news agency Aknews.

Later he performed the song at the festival (see video clip here). The first paragraph of the song says (words are translated from Kurdish):

If I had dreamed it, I would not have believed it,
being able to see Diyarbakir.
Good morning Diyarbakir,
I have missed you very much.
You opened your gates to me,
You made us very happy.

Tigran also visited the villages of Beemde (Kekhriban in Armenian) and Kaske, where his parents had been born. He said about these visits, “When I looked at the mountains, trees, streams and houses, my inside was shaking. I cried. I was extremely pained. I remembered what my father, my mother, what they experienced. I was saddened and bemoaned the fact that we had not grown up on this soil.”