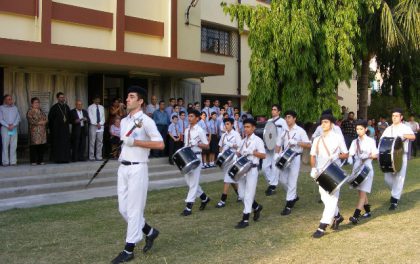 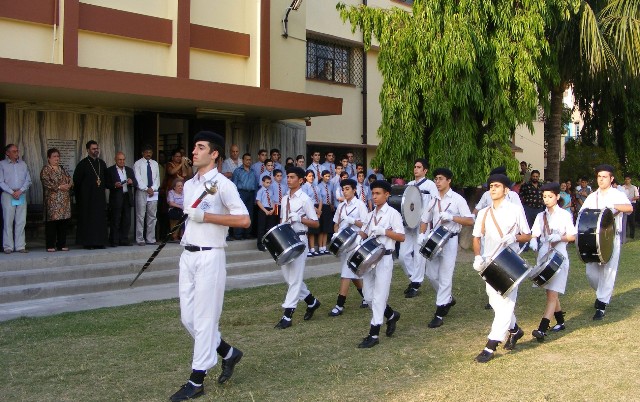 On 05 April 2009, His Holiness Karekin II, Catholicos of All Armenians, gave his permission for Reverend Father Khoren Hovhannisyan to be reinstated as a clergyman of the Armenian Church.

Father Hovhannisyan (baptismal name Nshan) was defrocked in 2002 for willfully deserting spiritual duties, but after showing regret he was accepted back and appointed as Manager of the Armenian College and Philanthropic Academy (ACPA) of Calcutta (Kolkata) and parish priest of the Armenian community of India.

Currently, the College, which holds historical significance for the Armenians in Asia and worldwide, has about 80 students, mostly from Iran, Iraq, Armenia and India, with several Indian and expatriate teachers.

?ACPA has a rich historical past and is one of the oldest educational institutions in the Armenian Diaspora. Today it continues to strive forward with enthusiasm and energy. Father Khoren Hovhannisyan, the newly appointed pastor of Armenians in India and the Manager of ACPA – together with the Church wardens of the Armenian Holy Church of Nazareth have not spared any effort to upgrade this historical institution of Kolkata?, emphasizes a recently issued press release by the school management.

This year, eight students from ACPA have obtained their school-leaving certificate (see photo). Six of them enrolled in leading schools in Kolkata for further studies and the remaining two returned to their families in Armenia.

According to some reports, the management of the school did not provide the necessary support for the rugby team this year. Participation in the local games was not allowed until the last moment. This created negative impact on the students. The rugby team has a history of achievements (see and old and new photo of the rugby teams).

Another report states that several teachers who have served the school in the last few years have been forced to resign and were replaced with local teachers.

The alumni ? school administration relations are not always in good terms. Many of ACPA graduates occupy high positions in their careers worldwide and continue to support the school, morally and financially, with a great sense of commitment. They always raise issues related to the school, but it is rarely that they feel satisfied when they visit their old school. Besides the poor living conditions, the students lack specialized guidance for their educational, social and emotional needs. Funds are available, but are rarely spent on their vocational trainings and other aspects that can improve their academic life.

The children of ACPA need all the moral support they can get. The methods used in the school are not pedagogical. The students are constantly threatened to be sent back home (where in most cases war and uncertainty prevail).

Until 2005, Sonia John ruled the school with semi-authoritarian approach. Father Oshagan Gulgulian, a member of the Etchmiadzin Brotherhood, was appointed in 2005 as head of an interim school board to govern the activities of the College and rectify problems caused by the old management. He managed to resolve some of the pressing issues.

During his tenure, the 300 years celebrations related to the Saint Nazareth church took place and Karekin II, Catholicos of All Armenians, visited India with a large group of pilgrims from all over the world, including ACPA graduates. They visited the Armenian monuments in several places in India, as far as Chennai (Madras). Several monuments were renovated on this occasion and prayers were heard in abandoned structures. There are some indications that not all renovation work was of good quality. Works in the Madras church complex for example were carried on hastily, to meet the celebration deadline.


Many of our Diaspora establishments suffer from discontinuity. As soon as a new administrator is appointed a new page is opened, often without taking into consideration the old experience.

Our community life is a combination of laymen and clergymen working together in a well defined roles, sharing duties and responsibilities. If the balance is shifted, then one of the sides will abuse its authority. This has happened in ACPA in the past and may repeat itself, if the local Armenian society is not effectively involved in the community life.

The upcoming community elections in November 2009 could be a good opportunity to create a new atmosphere. Reports, however, indicate that two wardens (Susan Reuben and Sunil Sobti) have submitted a petition in the Calcutta High Court in September 2006 and subsequently received judgment in 2008, according to which an amendment to the scheme governing the Armenian Church has been accepted by the Court. The amendment disallows people holding non-Indian passports to serve on the Church Committee and rules that only those who are exempt from receiving financial aid from the Church and who have been residing in Kolkata for the last 4 years have the right to vote and be elected.

Since more than two thirds of the tiny community receives financial aid and others have foreign passports, voting and electing rights are practically left with a handful of Indian Armenians (about 15 persons) who will keep the governance amongst themselves. The chief accountant of the Church Committee is in close relationship with them.

Most probably, Etchmiadzin is not aware about this scenario, that can endanger the future of ACPA and other Armenian properties in India.

There are children in Iran, Iraq and elsewhere who yearn for a chance for education. The well-known Melkonian Educational Institute had a role to play in educating the European and Middle Eastern Armenian students and ACPA has a similar role in Asia. The lessons derived from the closure of Melkonian should help us make the best use of ACPA.

Until this happens, we would like to ask the Catholicos of All Armenians not to consider India as a place for pilgrimages only. ACPA has been functioning without interruption for 188 years. ?The doors of ACPA are always open to welcome the Armenian students? says a press release. Let us work together to guarantee the continuity and best implementation of this pledge.

Photos:
Upper-left photo: The anniversary of the establishment of the Armenian College and Philanthropic Academy of Calcutta (ACPA) was marked on Founder?s day, 02 April 2009.