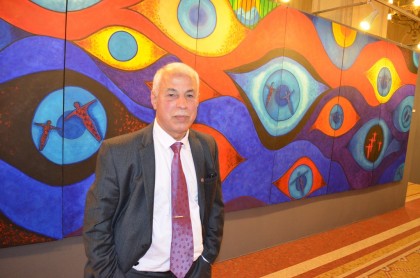 Jirayr Khachikian, known also as Jirka, is born in Basra, Iraq, from orphan parents who have survived the Armenian Genocide.

After the Genocide of 1915 his father managed to reach Iraq, but as the living conditions in that country were very difficult, he and many other Armenian orphans were transferred to Jerusalem, where the Armenians had somehow organized institutions, including monastery and school.

In 1924, Emperor Haile Sellasie of Ethiopia (then Crown Prince Ras Tafari) had a stop at Jerusalem on his way to Europe. During the visit he came to know about the Armenians orphans and he was impressed so much that he asked the Armenian Patriarchate of Jerusalem to adopt 40 of them and bring them to his country. The children (known as Arba Lijoch, or the “forty children” in Amharic) had some musical background. They continued their musical education under the leadership of the bandleader Kevork Nalbandian after their arrival in Addis Ababa.

Jirka’s father was one of these 40 orphans. Unlike the other orphans, he stayed in Ethiopia for a short period of time, after which he returned back to the Middle East. He married Jirka’s mother Azadouhi in Beirut and decided to settle in Iraq, the country where he first reached as an orphan.

Ironically, Jirka has gone through the opposite direction. After studying in Iraq, he moved to Lebanon and later to Yerevan, Armenia, where he obtained his engineering degree in architecture. His post graduate studies brought him to Cachan in Paris where he lives since 1978. He has completed numerous construction projects in France.

Being an architect himself, his work is a synergy of painting and architecture, where different geometric shapes and vibrant colors are applied in a remarkable harmony.

Access Token not set. You can generate Access Tokens for your Page or Profile on fb.srizon.com. After generating the access token, insert it on the backend