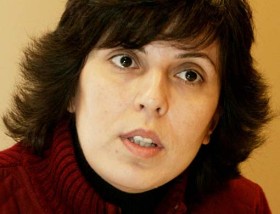 When Vera and her three brothers and sisters were very young, their father longed for his children and Syrian Orthodox wife to learn how to speak his mother tongue -Armenian.

His wish came true and Vera became actively involved in preserving the Armenian identity of her ancestors, not just their language.

“My mother started learning Armenian with us, and taught it to us afterwards,” said Vera Yacoubian, the Executive Director of the Armenian National Committee in the Middle East.

“The Armenian language is essential to keep the identity [alive]…The foundation is to preserve our traditions and heritage,” she told Gulf News.

However, “Learning our language doesn't mean we don't learn other languages. Later, we learned Arabic and English,” she added.

Protecting their Armenian ethnicity is essential, wherever they choose to live. “But our loyalty is to the country we come from in the first place,” Yacoubian said.

“We came from the Orient and we don't want our roots to be extracted from a region we belong to since the fifth and sixth centuries,” she added. Armenians pride themselves for having the oldest church in Mosel in northern Iraq.

Yacoubian, in her early forties, holds a bachelor's degree in mass communication from the Lebanese University. Apart from working in the media, she taught Arabic for eight years, and worked as an adviser to the Lebanese youth minister before joining the Beirut-based Armenian committee, which was formed in 2005.

Besides Beirut, committees are also based in Washington, Brussels, Moscow and the Armenian capital, Yerevan, that aim to preserve the ethnicity of their communities.

“We are an artistic people,” she said in reference to Armenians excelling in several professions and in arts and crafts, such as sculpture, ceramics and painting.

“Our presence is peaceful. We don't have political aims. All we are seeking to do is to spread awareness of our identity and history.”

And, Yacoubian added, the “most important issue in the life of each Armenian” is the genocide of 1.5 million Armenians killed by the Ottoman Turks during the years 1915-1923, through systematic massacres and starvation.

Turkey denies there was a genocide. While it acknowledges the death of many Armenians, it adds the figure is below one million.

Until recently, Turks considered the issue of the genocide as a “taboo” subject. Armenians insist on getting the Turkish government to acknowledge what happened as “genocide.”

Today, nearly three million Armenians live in Armenia, and five million others live among the diaspora. At the same time, they are part of the Arab population in several countries, including Lebanon, Iran, Syria, Egypt, Iraq and Jordan. As Yacoubian puts it, “We are Arab citizens with Armenian roots.”

Source: “Gulf News“, 08 March 2007
Photo: Vera Yakoubian, Executive Director of the Armenian National Committee in the Middle East. She is actively involved in preserving their heritage.