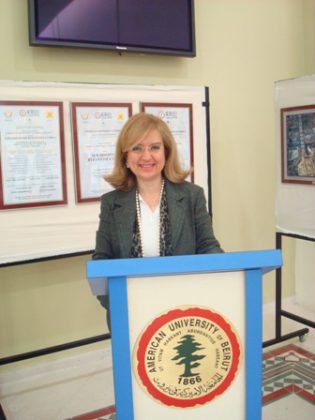 Lena Kelekian is an Artist, iconographer, muralist, restorer, geologist, environmental designer and lecturer on Byzantine Art History. She is the winner of the 2008 Beijing Olympic gold medal and torch for the “Olympic Fine Arts Exhibition”.

Azad-Hye had the opportunity to meet her and to have the following conversation:

Beirut is more beautiful with your work, how do you assess the aesthetic conditions in the Arab capitals? We know that some Municipalities in the Arab world have big budgets. Are they able to translate the budget into work of high calibre?

Beirut is a beautiful place as it is the centre of many cultures since old times. Beirut can be more beautiful not only with my work but also with the contribution of all who can add to its natural and aesthetic sides. Artworks in a city are like the jewels, bracelets and earrings a pretty woman wears. They reflect the character of the city in meaningful ways. Municipalities should allocate certain budget for city embellishment works. The artistic works in display will make the city more attractive, bringing positive changes to the quality of life. Unfortunately not always there are enough financial resources to carry on the necessary projects, but with limited budget and good will a lot could be achieved. I can mention the example of Burj Hammoud Municipality with its ever dynamic mayor Antranik Misserlian.

How can the beauty aspects of an urban settlement be emphasized?

It all depends on the creative mind behind the environmental design. First a good study of the heritage of the city and the cultural background of the inhabitants would be carried on, their interests, lifestyle examined, followed by research on the nature and geomorphology of the city. The ability of the artist or the environmental designer along with the architect in creating beauty attractions in the right city locations would help the inhabitants to feel comfortable with the surroundings.

If the elements of physical beauty are limited can we still create a beautiful setting?

Yes. Creativity is unlimited and God is the first architect who has created the universe and shaped it in a beautiful form.

Can a crowded place like Burj Hammoud undergo remarkable changes or it is already deadlock situation?

Certainly it can, if you have the right measurements and colours, e.g., a very small area that was a garbage dump in the area of Saint Rita was transformed to a beautiful playground, used by 400 children with their families in a relaxing setting of trees and beautifully designed walls with cartoon characters. Another example is the war torn area of the main street of the river Beirut bank that had a gloomy dark cement wall with shrapnel marks scattered all over. It was transformed to a flower garden with blue waters running underneath after the installation of the 150 metres long wall in cut ceramics. I receive a lot of phone calls congratulating me on having done this wall and the passers by tell me the same thing: “you made me happy with the colourful flowers before going to work and when returning from work”.

Artist, iconographer, geologist, restorer, designer, lecturer, etc, these are some of the identities that define Lena Kelekian. How is it possible to combine all these in one person? Is there any part that is considered more privileged in your pursuits?

I think in a three dimensional way. The psyche, the pnevma (spirit) and the psoma (body). To have a strong base you should start as scientist. I have first studied geology. That is my passion and the psyche side. Then comes the pnevma with its spiritual mark. I believe in God who gives you the dynamo of healthy thinking. Finally, the two are incorporated into the psoma, with an earthly beauty. Having in balance all these three aspects, one can lead a very prolific life and can have the time to create and produce more than it is normally expected.

Can you tell us what role has Cyprus played in your life? Your students in the American University of Beirut had a photography exhibition on about Byzantine Churches in Cyprus in 2009. To what extent did your knowledge of the country benefit this educational expedition?

My dearest mother being Cypriot I have great love for Cyprus. In fact, I consider myself as half Cypriot. I have been to Cyprus from even before I was born. The geology of the island being an ophiolite fascinates me. The rich minerals of the island amaze me and the wealth of the Byzantine churches with the icons and frescos entice me. Although I am Lebanese but I find much interesting research work to do in Cyprus.

– Lena Kelekian is an active member of “Olympia Fine Art Association” (OFAA), a group of more than 100 professional artists ? painters and sculptors, from over 40 countries of all continents. She holds the position of Exhibitions Manager (Curator of Exhibitions) and was elected as President of OFAA for the period 2011-2013. She is also President of MEADOWS (Mediterranean Endeavours Advancing Development of Widespread Sustainability). Currently she is preparing to participate in exhibitions in Spain, Croatia and India.

– In 2010 she supervised the organization of two exhibitions in Bosnia & Herzegovina, one in the Olympic City of Sarajevo and second in the City of the Olympic athletes, Banja Luka.

– In 2008 Lena Kelekian received the first prize in the Beijing 2008 “Olympic Fine Arts Exhibition”. The city of Beijing hosed her and her husband for nine days that covered the opening ceremony of the Olympic Games and an extended tour program.