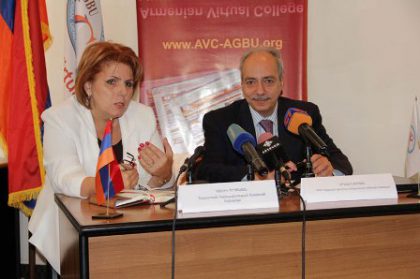 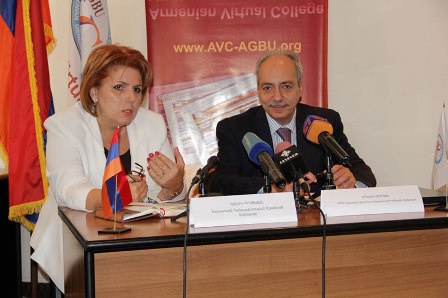 Yerevan, Armenia ? This week, the Armenian General Benevolent Union's Armenian Virtual College (AVC) celebrated the second anniversary of its groundbreaking online institute by holding a Global Online Forum to reflect on the wide range of achievements, announce its future plans, and prepare for the new expansion that will allow it to reach more Armenians than ever before.

Launched in June 2009, AVC is the first Armenian online college, with a distinct goal to make Armenian education available to everyone everywhere through modern technologies. During its two years of operation, AVC has had nine academic terms with over 1,300 students from 50 countries. From the United States to Russia, from Venezuela to South Africa, and from Argentina to Reunion Island in the Indian Ocean, the success students have had at learning proves that AGBU's new education project lives up to its goal to surmount educational barriers and international boundaries.

The Global Online Forum was led by AGBU Central Board member Yervant Zorian, who is also the chairman of AVC. During the event, Armenia's Culture Minister Hasmik Poghosyan and other governmental and honorable guests delivered welcoming speeches that celebrated AVC's continuing success.

“Among thousands of online universities in the world, AVC is the first one that provides and is dedicated to Armenian education. Today, when only five percent of Armenian youth in the diaspora has access to face-to-face Armenian educational programs, the importance of such an institution is becoming more and more vivid,” said Zorian.

“While our virtual students around the world enthusiastically participate in our existing courses, AVC continues to expand its offerings in multiple directions. I am very pleased to announce today the expansion of our Armenian culture program to cover Armenian visual art courses, the adoption of new advanced learning technologies to enable interactive animation in teaching Armenian history, the augmentation of our instruction languages to include Turkish as the seventh language, which is beneficiary for our compatriots residing in Turkey and Western Europe, and finally the extension of our hybrid education program to the CIS countries by initiating AVC Labs in Tbilisi and Rostov.”

Armenia's Culture Minister was enthusiastic about AVC's achievements. “Two years ago when the project was launched, it was unclear how this brilliant idea would be realized. The results you achieved today are very impressive. I will continue to invest my efforts for presenting this project among all possible circles,” Minister Poghosyan said.

The Primate of the Georgian Diocese of the Armenian Apostolic Church expressed his happiness in seeing how AVC has brought a renewed energy to Armenian education in the centuries-old Armenian community of Tbilisi. “Throughout the years, the number of Armenian schools in Tbilisi has decreased to only one as of the 2011 academic year for a city with an Armenian population of more than 80,000. As a result, 90 percent of Russian school pupils in Tbilisi are Armenians,” said Bishop Vazgen Mirzakhanyan. “While it would be good to have traditional Armenian educational institutions on-site, AVC is an excellent solution to preserve the Armenian identity in communities with no Armenian schools.”

AVC was first initiated in 2004 under the leadership of Yervant Zorian and AGBU's Central Board of Directors as an educational program that better addresses the needs of Armenians and appeals to contemporary students. Since then, the multimedia content has been developed largely in Armenia in collaboration with scientists and engineers at Yerevan State University's Center of IT Education and Research.

During its first two years of operation, AVC also introduced a hybrid education method, which targets schools and educational institutes by offering a blend of conventional and online pedagogies. AVC implemented this method for the first time with the Ohanessian Friday School of Sharjah in the United Arab Emirates. Since that initial experiment, nearly 10 schools and communities have joined the hybrid educational model and use AVC as part of their curriculum.

The AVC local committee of Tbilisi was present for the Global Online Forum and they discussed their plans to establish an AVC Lab in the local church center. Similarly, the head of the Armenian community of Rostov, Russia, spoke about the opening of the first operational AVC lab in his city, starting October 2011.

Many AVC students from different countries of the world, as well as AVC online instructors and online education specialists, participated in the Global Online Forum through online tools. Live video connections were established with students from the United States, Russia, Spain and Uruguay. Students and instructors shared their AVC experiences and answered audience questions about the online college. Some students, who happened to be visiting Armenia at the time, attended the event and shared their views in person.

Established in 1906, AGBU (www.agbu.org) is the world's largest non-profit Armenian organization. Headquartered in New York City, AGBU preserves and promotes the Armenian identity and heritage through educational, cultural and humanitarian programs, annually touching the lives of some 400,000 Armenians around the world.

For more information about AGBU and its worldwide programs, please visit www.agbu.org.

Any learning experience has to be: Meaningful, Educational, Memorable and Entertaining!

The classes start on October 3 and end on December 6:
To enroll, please visit AVC portal at www.avc-agbu.org

Initiated in 2004 by AGBU?s Silicon Valley Chapter, the mission of AGBU Armenian Virtual College is to reach individuals and groups worldwide who seek education in Armenian Studies.  Through the use of both synchronous and asynchronous communications, AVC allows students to learn new material at their own pace, while also confering face-to-face with their Online Instructors and virtual classmates.  Through university-level online courses AVC creates a virtual learning community that fosters both cultural education and social connections.