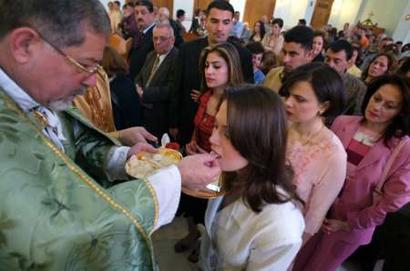 “Many Iraqi Armenians are planning to apply for Armenian citizenship”, said Barouyr Hagopian, Chairman of the National Council of the Armenians of Iraq (PanArmenian website, 24 March 2007).

“A significant part of Armenians living in Iraq are not satisfied with their current situation and they are waiting for the day when the new law on dual citizenship will come into force in Armenia,” Hagopian said.

At the same time he underlined that Armenians living in Iraqi Kurdistan are not facing any political problems. “According to our information, Armenians residing in Northern Iraq have not suffered from the escalation of the conflict with Turkey in relation with the PKK presence”.

“Four years have passed since the launch of the military campaign by Coalition Forces in Iraq and I can confirm that the number of Armenians who have immigrated abroad does not exceed 3.000,” Hagopian said. According to him there were 18.000 Armenians in Iraq before the recent war and now only 15.000 remain in the country. “Generally speaking, during the past 4 years 1.500 Armenians immigrated to Syria, about 1.000 arrived in Armenia and about 500 departed for Jordan,? he stressed.

Hagopian mentioned that during the same period around 28 Armenians died as a result of political instability in Iraq. “All those who died were ordinary people who did not have any relation to military actions. During the same period 28 Armenians were kidnapped, 25 of them returned to their families after paying a ransom. The fate of the two is still unknown, while the body of the third captive was returned to his family,” Hagopian said.

He noted that the Armenian community of Iraq does not experience any significant problems. “We do not attempt to participate in the political life of Iraq. Armenians living in Iraq traditionally deal with trade, craft and construction. Before the latest war there were a lot of physicians and teachers of Armenian origin in Iraq,”  Hagopian concluded.