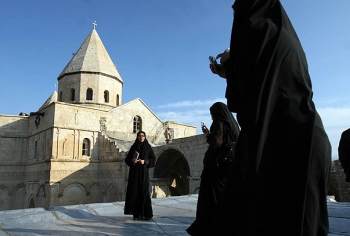 Tehran resident Anjik has seen her three sons emigrate to the United States in recent years, and now her daughter plans to go as well once she gets married.

Anjik, 60, is a member of the Armenian community, which counts itself the world?s oldest Christian nation. Although their homeland lay within the Ottoman Empire, there have also been Armenians in Iran for centuries.

Recent years have seen a surge in emigration, though emigrants are generally driven by the search for a better life rather than discrimination. As a substantial minority, the Armenians enjoy special status under the Iranian constitution and the right to pursue their own traditions and faith.

Anjik says emigration to America has become easier of late, thanks to a scheme where members of Iran?s religious minorities can file immigration applications via the Hebrew Immigrant Aid Society, HIAS, and then follow up at the Austrian embassy in Tehran.

?When the application is okayed, HIAS pays 3,000 [US] dollars for each family member, and then you all travel to Austria where you stay until all the legalities are done with and you can leave for the States,? Anjik explained.

HIAS started life as an organisation helping Jews escape danger and discrimination, but more recently has assisted other minorities wishing to leave Iran.

Iranian hardliners naturally view HIAS with suspicion, but the country?s government has turned a blind eye to this channel of emigration.

According to Vazgen, an Armenian mechanic in Tehran, ?To emigrate to the US these days, you just have to make up your mind and go. Money isn?t a problem.?

Most would-be emigrants cite the lack of prospects in the poor economic situation facing Iran. But others believe they have more chance of preserving their language and identity if they remain in Iran.

Vazgen is in two minds whether to leave himself, as life in America would be so different from the traditional ways of Armenians in Iran.

?I might not be able to control my children in the US as well as I can in Iran,? he explained. ?We have special schools for Armenians here, and there are special clubs, churches and so on.?

Such fears that emigration would bring a dilution of identity and culture, such as the custom of only marrying within the community, are common among the more traditionally-minded Armenians.

In Iran, the sharp dividing line between their Christian faith and the Shia Islam of the majority population has helped the Armenians preserve a strong separate identity. Marriage outside the group is strongly discouraged, and Armenian community organisations are quietly exclusive of others.

As a matter of principle, the main faith group, the Armenian Apostolic Church, does not engage in proselytising, and so avoids running into trouble with the Shia establishment. Nor does the smaller Armenian Catholic Church. The Armenian Protestant church does do missionary work, though this is mostly carried out by its Muslim converts, a fact that has greatly annoyed senior Islamic clergy in Iran.

Vazgen?s children attend an Armenian school in the Tehran neighbourhoods where they live. They study the Armenian language and the Christian faith instead of the Islamic curriculum of most Iranian schools. If Armenian children attend mainstream schools, they are exempted from religious studies and attend Armenian classes elsewhere.

The falling numbers at Armenian schools in Iran are one indication of the level of emigration. One school that had 450 pupils seven years ago only has 180 now.

The population decline is even more evident in other areas settled by Armenians, chief among them Isfahan, Tabriz and Urmieh, and among the
much smaller communities in Rasht, Bandar Anzali and Arak.

The latest wave of emigration is the third in the last three decades ? many left in the first few years after the 1979 Islamic Revolution and more during the eight-year war with Iraq in the Eighties.

In the 1980s, the Armenian population was estimated at about 200,0000, but there are no reliable updated statistics on their numbers since the recent upsurge in emigration began. Estimates vary between 40,000 and 80,000 across the country.

The Armenian cultural presence is most completely evident in the Julfa district of Isfahan. Resettled there on the orders of 17th century monarch Shah Abbas, they renamed their new home after the town of Julfa back in historical Armenia, to the northwest of Iran.

Although Armenians had lived elsewhere in Iran for centuries, it was from Isfahan that their influence began spreading in the areas of commerce, industry and culture started. The first print house in the Middle East was set up by Armenians here in 1638.

Julfa?s Armenians later played an important role in shaping Iran?s educational system, building one of the oldest schools based on the European model around 120 years ago.

Some of Tehran?s most famous pieces of architecture ? Hasanabad Square, the foreign ministry building, and the Golestan and Marmar palaces ? were the work of Armenian architects.

Before 1979, Armenian bars and cafes were very popular, and many famous personalities in the arts ? music, dance, cinema, theatre and sculpture came from the community. Now that role is lost, not just for Armenians but for wider Iranian society.

During the war with Iraq, Armenians fought alongside other Iranians, and around 300 were killed, disabled or captured by Iraqi forces.

Armenians and other recognised religious minorities are still pressing for legislative changes to prevent discrimination. A bill is currently in parliament to change inheritance law, which currently says that if a non-Muslim converts to Islam he becomes heir to his father?s entire assets, and other siblings will get nothing. So far there has been little progress.

At the same time, such problems do not seem to be a major factor in prompting emigration.

These days, the Armenians enjoy a reputation for quality work in business, food production, and car repair. Like other religious minorities, they cannot hold sensitive military or government positions, but some occupy senior positions as managers and engineers in state-run construction projects and industries.

For those who opt to remain rather than emigrate, there is a rich cultural scene ? the churches and clubs are busy, books are printed in the unique Armenian script, and musicians come over from the neighbouring state of Armenia to perform in Iran.

Armenians also enjoy unofficial fame for producing homemade alcohol. Strictly prohibited by Iranian law, the practice is tolerated as long as it is for consumption within the Armenian community. In Islamic Iran, the highest praise one can give to a glass of homemade wine, vodka or beer is ?Armenian? ? even if it was made by someone else.

*Karen Stepanian is the pseudonym of an Iranian Armenian writer who lives in Isfahan.