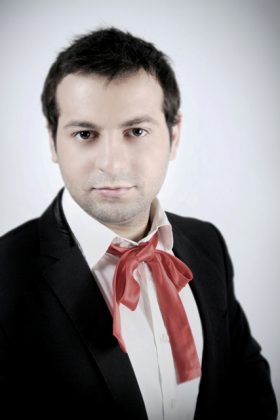 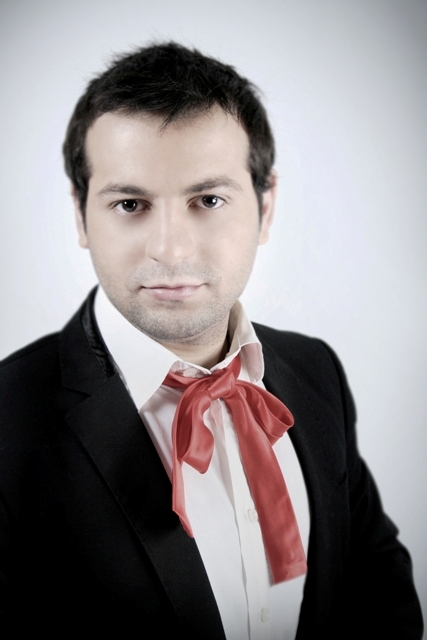 One of the pleasures of writing about music is when you are completely surprised by a new artist. Most of Armenian pop stars of today are the product of commercialism and are heavily influenced by the market. This is even obvious in the work of the composers. It is rare these days to see a real paramount hit instead of a hook or a riff.

The above introduction brings us to today?s surprise, Karen Grigorian. And if you are looking for something new then you have to experience ?Emotions?.

On 10 June 2010, I went to a CD presentation of an unknown composer named Karen Grigorian. The name sounded familiar in the beginning, but I could not relate it to anyone I knew before. I was told that the album was a compilation of different songs entitled ?Emotions?, composed by Karen Grigorian. One of the artists included in this album was Dikran Bedrosian who invited me to his performance of the song ?My true love?.

Such presentation parties usually take place in big music stores or small cafes and clubs, where the artist meets his friends and relatives, signs some records and posters, and takes photos with his fans. Sometimes small receptions are held, but this one broke all the rules. Karen Grigorian presented his debut album ?Emotions? at Cafesjian Art Center in Yerevan; the top floor of Cascade complex in a very cozy atmosphere where artists performed their songs under dimmed lights. This reminded me of MTV?s ?Unplugged? acoustic concerts.

I sat in the back, enjoyed the good music and cold drinks that were served, unaware that this guy later will enter my circle of friends.

But before going through the album ?Emotions? let us review some details about the life and career of Karen Grigorian.

Karen Grigorian was born in Yerevan, Armenia in 1984. He attended and graduated from several educational institutions in Armenia and abroad. It is worth mentioning that he has recently earned both Bachelor degree in political science and Master degree in European studies.

His artistic side has always been obvious and remarkable among his friends. As an artist he has expressed his inner world in different ways such as music composing, producing, photographing and film directing, in addition to his other experiences as a TV host, actor, art director and journalist.

As a photographer and graphic designer Karen has already 10 exhibitions of his own such as “Portfolio“, Armenian Rock Fashion, “Interval“; an exhibition of graphic art, “Silence“; a photo exhibition dedicated to the Armenian Genocide, ?No Aids” Project; a charity exhibition to help Haitian people after the catastrophe and other projects as well. He has received honorable prizes and awards from Germany, Italy and the Netherlands.

One of Karen Grigorian?s impressive achievements was the bilingual (Armenian-English) book dedicated to Marc Shagall, where he wrote his analysis and interpretations. As a book illustrator he has collaborated with many Armenian writers.

In 2007 Karen Grigorian had produced and directed a short-length film called ?Angels on the roofs?, displayed at Yerevan?s biggest cinemas and later released on a DVD format. Karen had also a small role in this very short movie. It was a big chance for him to capture both the audience attention and the critics? appreciation.

Karen had also directed several music video clips and produced albums for different Armenian pop stars. Since February 2009 he had produced and hosted his own TV show called ?Armenia in Europe?, which aims to promote the public understanding of the European Union, its values, and stipulate a political dialogue and somehow contribute to the awareness of the Armenian society about integration with Europe. 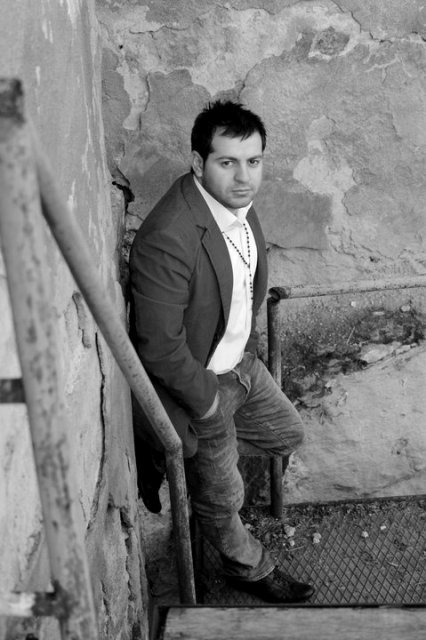 In year 1992, he entered Armen Dikranian?s musical school, class of violin and graduated in 1998.

As a songwriter, the release of ?Emotions? was his first big success in Armenia. Now he is working on his debut instrumental album called ?White Illusions? (Spidag Desilqner); a new project under classical genre and with collaboration of talented musicians such as Arek Mirzoian, Arthur Popigian, Arthur Zakian and others.

As a music producer, his biggest achievement was producing the album of Bishop Anushavan Jamgochian entitled ?Melodies, Treasures, Poems? (Meghetiner, Kantser, Dagher); a spiritual album that included 10 works of Armenian masters such as Komitas, Naregatsi, Bozabalian ?etc. arranged by composer Arthur Popigian. The album presentation was held on June the 11th at the house-museum of Yegishe Charents.

Currently Karen Grigorian is the director of ?GRIG? design studio. He is also a member of both Armenian Artists and Armenian Designers Unions.

?Emotions? flows really well. It is an album you can leave in your CD player without having to switch tracks. This proves that Karen is a promising songwriter. His name deserves to be included one day in the hall of fame for his hard work and super talent in songwriting and producing.

The album includes different genres from dance numbers to smooth and gliding ballads in both classic-pop, rock and Jazz. Usually I don?t prefer too much variety of genres in one album, but Karen smartly blends the up-tempo tracks with the soulful romantics in a magical smooth way that you don?t feel the difference.

Each track of ?Emotions? reflects a page from Karen Grigorian?s life and a chapter from his life experience. The album takes you to a musical journey through universal adventures, trials, growth – that we all experience every day.

There are no complicated high notes or stunning lyrics. Instead, what makes this CD very special is the honesty and simplicity that can be felt in those fourteen songs in addition to the high level of transparency that Karen uses in transforming his feelings into songs.

?Emotions? is the result of seven months of hard work as the composer explains. He didn?t choose the artists randomly; each one was carefully picked up to match the song genre needed to be performed.

Back to the presentation ceremony: A brief introduction preceded each performance, presented by Radio Van?s beloved DJ Jack who hosted the whole show.

The evening began with an instrumental medley of several songs played on piano by Arek Mirzoian who also made the arrangements of both Shushan Bedrosian and Lilu?s songs.

The first performance came from Arevik Alaverdian of an exclusive song ?Save our love? (Prgenq mer sere). Lyrics and music by Karen Grigorian. The song has a special meaning to the composer and it is not included in the album.

One of the remarkable performances was Lilu?s ?Hoqnel em? (I?m so tired). It is the only Armenian track in the CD together with Sirusho?s ?Shad lav, vochinch? (It?s ok, all right). I have never seen Lilu singing live and never expected she could convince the audience with her brilliant performance, although it was only the second time she was performing this song. ?Karen is a talented composer and I?m glad to work with him. Besides, ?Hoqnel em? is a new song with its interesting and unique genre that I have never experienced before,? she said. It is important to mention that the video clip of this song is directed by Karen himself. 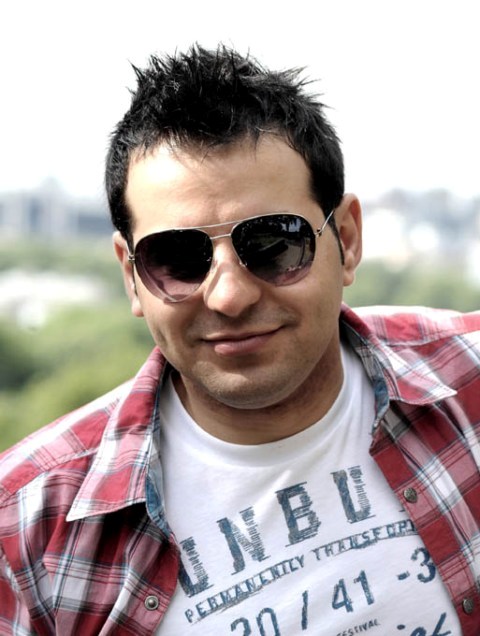 No need to mention how great some performances sounded such as Dikran Bedrosian?s ?My true love? which is the only Jazz track in the album, Shushan?s acoustic performance of ?Sunrise? and Lucina?s ?Once again?. I guess Sirusho would be included in this category too, but she was absent for being out of the country.

The title of the song ?My true love? was originally ?My true cat? and it was about a story of a cat but for some reasons the lyrics were modified and the cat turned into love at the end. Karen says: ?I like Dikran very much. He is very talented singer and I enjoyed working with such a professional musician?.

The calm place was suddenly turned to a clubbing pub during the demonstration of the only two upbeat dance tracks. I could not imagine somebody except Juice to perform the song ?You are my KIX? because it sounded as crazy as she was with her daring look and shocking performance.

The other track was ?Scream? by Nick Egibian who made a dancing show with his two accompanied girlies. It is worth to mention that Nick had arranged most of the tracks of this album too.

Karen has put all his true feelings in a broken hearted love song called ?Why? performed by the two members of the former group Hayer; Nelly and Asha (Arshaluys). ?Why? speaks about not to wait too long when we are wrong and not to leave and say goodbye when mistakes are made.

But I guess his masterpiece would be the album title cut ?Emotions?. Karen opens the shell of his heart and pulls out piles of emotions in a high transparency, sensitivity and grace.

Life is not yet through, there is still a flame in life?? ?Emotions? was perfectly performed by Anahid Shahbazian.

Mher and Sona Shahbazian performed a duet called ?Give your hand?. The song speaks about helping people, caring more about each other and stop being selfish or act carelessly. For Mher this was his first collaboration with Karen, but Sona has previous cooperation with Karen, who has helped her in the photography and album art of her CD ?Tebi yerginq? (To the sky).

There was another duet in a soft/rock genre called ?You and me? performed by Asdghik Safarian and Vartan Badalian. It was the first experience for Vartan to sing in English and he did it well. Personally, I found the Vartan/Asdghig combination very interesting, especially that we used to hear him singing in Armenian and mostly in popular and pop genres as well.

Two love songs are left to finalize Karen?s ?Emotions?. ?Look my heart? by Erik and ?For you? by Sergey Krikorian. Both artists made their performances in their own ways. Eric with his good vocals, smooth movements on the stage and stylish appearance, while Sergey was more romantic and mature.

There comes a time in a relationship, when you feel neglected and not well appreciated by the other partner whom you thought was your other half. At this point all you have to do is to forgive, forget and leave. This interpretation came from Sirusho with her smash hit ?Shad lav, vochinch? which was played during the record signing session. The song was part of a Megamix of some cover dance numbers perfectly mixed in one single track, but the complete version is included in Sirusho?s latest album ?Havadum em? (I believe).

?Emotions? is a great collection from a fascinating artist who made an open invitation to experience life. I definitely recommend this album with a 100% guarantee enjoyment to anyone who likes to discover the pure world of Karen Grigorian, with his simple but resonant tones and stirring lyrics.

Yet there are two points that I am not satisfied with. First, is the English accent that some artists still need to work on. Vartan Badalian with his first English experience was better than others who have the false impression that they are masters in English.

My other criticism goes to the composer himself. As a photographer, Karen could have picked a better photo for the album cover, although the rest of the graphic art is perfect.

Finally, ?Emotions? is a terrific album and each track is solid as a rock. Congratulations Karen and keep up doing the good job.