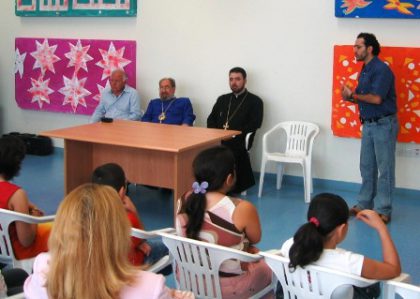 ? May 27, 2006: The Mesrobian One Day Armenian School of completed its second academic year. On the occasion of the annual Easter visit of the Prelate Archbishop Gorun Babyan to Qatar, who was accompanied by the perish priest of UAE Father Aram Dekermendjian, a gathering was organized to complete the activities of the school under the patronage of Serpazan Hayr, and Der Hayr, with the presence of students, parents, teachers, administration, the chairman and representatives of Armenian national council of Qatar.

In his welcoming speech, the school administrator of the current academic year Sarkis Kerkezian, thanked the parents and the teachers for their support and cooperation which helped the school to overcome all the difficulties and the challenges during the passed academic year. He emphasized the importance of the learning the Armenian language, religion and History that will evolve the Armenian spirit among the new generation.

The students prayed collectively the Holy prayer, sang songs and recited poems learned during the past two academic years. Through their performance they were able to give a sense of fulfillment and satisfaction to their parents and the audience.

Archbishop Gorun Babyan was invited to deliver his message to the students and the parents. He emphasized the importance of the continuity and persistence to overcome all the challenges of the school. He gave several examples from the Armenian communities of neighboring gulf countries and how they started with the same humble beginnings and now have grown into a full fledge organized schools. He said that some of the students who had graduated from the One day Armenian schools have pursued careers and doctorate degrees in Armenian Literature and History. Serpazan Hayr stressed on the importance of commitment and dedication to the objectives of the school which will enhance the presence of the Armenian character in this rapidly developing community. He thanked the Lebanese Ambassador and the director of the Lebanese school for providing the school facilities.

Father Aram Dekermendjian, who visits every Christmas and Easter to perform the Holy Mass and the blessing of the Armenian homes, gave a word of encouragement to the school administration and the council with whom he has been interacting in the last few years. He described the current status of the two Armenian one day schools in Sharjah and and the zealous effort that the community members are putting in their preservation and growth.

The event ended with a souvenir photo session, which was followed by a community lunch.

About Mesrobian Armenian one day school of

Mesrobian Armenian one day School was established by the Armenian National Council of Qatar in 2004. The School was named after St. Mesrob since its establishment date coincided with the 1600 centenary celebrations of the Armenian alphabet invention.

Currently, the school has 13 registered students divided into 4 classes by there corresponding age groups (from 4 – 12 years old). The 2 hour/week one day school is held over the weekend according to the convenience and the agreement of all the parents.

The curriculum of the school mainly focuses on teaching Armenian Language, grammar, Armenian history and Religion. The classes are conducted in the premises of the of .

In addition to the books, workbooks, and software, the school provides a pick up bus facility to the students.