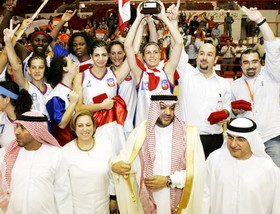 Antranik displayed strong performance throughout the championship and scored successive wins, securing the leadership of the Arab women basketball.

In the opening match on 24th May 2006, another Lebanese Armenian team Homenetmen Antelias won 70-55 against Jordanian Orthodox Club. Homenetmen failed to score any other win in championship and lost the matches against ?s Olympic and ?s Sporting (see all results below).

: Antranik successfully kept the Arab title in with a 76-59 win against Al Wahda in the final of the 13th Women's Arab Clubs Basketball Championship at Al Ahli Club last night.

“We were here to defend the title for and we did so in style,” said Antranik coach Shafiq Akiki.

Both finalists knew that much depended on the performance of the home-grown players, given the fact that the two foreign players [Agga Joblonska and Jurgita Kausate in the Syrian team, and Melshika Bowman and Adeola Olanrewaju in the Lebanese team] each in their ranks would cancel out each other.

After lagging behind for a better part of the opening quarter, Antranik held on to a slender 25-21 lead with Bowman topscoring with 12 points and Olanrewaju coming in handy under the basket with six points. Al Wahda, on the other hand, relied mostly on the scoring ability of Kausate, who outscored her teammates with 10 points.

Midway through the third quarter, Antranik showed why they are the Arab champions as they accelerated their scoring. And though Jablonska and Kausate waged a gritty battle both in offence and defence, the Lebanese were 63-44 ahead to be in the clear by 19 points at the end of the quarter. The Lebanese played out the final quarter, slowing down the game every time the Syrians sought to raise the tempo.

“We are happy we gave a good account of ourselves by reaching the final,” stated Al Wahda coach Ahmad Helfawi.

Players and coaching staff of Antranik are joined by officials as the team celebrate after winning the 13th Women's Arab Clubs Basketball Championship at Al Alhi Club on 1st June 2006.

The unstoppable AGBU Armenian Youth Association (AYA) Antranik Beirut Women's Basketball team rose to the top of the Arab Champion League tonight in after defeating the Syrian national champion team “Al Wahda.” The victory holds particular sentiment as AGBU is celebrating both its Centennial and the 75th Anniversary of AYA this year.

Playing a series of games with , , , and , the final buzzer signaled yet another winning moment for AGBU's female basketball stars from . With the Antranik team leading after every quarter, and by at least a 10-point margin after the first quarter, the final result was 76 – 59.

Upon their arrival home to on June 2, the athletes were greeted at the airport with an official reception led by 's Youth & Sports Minister, Ahmed Fatfat, and joined by the Chairs and members of the Lebanese Olympic Committee and Basketball Federation. AGBU District Chairman Avedis Demirdjian, along with Chapter and AYA committee members and supporters, also attended the victorious celebration.

This is not the first major championship for the Beirut AYA Antranik team this year. In March 2006, the basketball athletes participated in another arduous tournament to win the Lebanese National Women's Championships for the fourth consecutive year.

Since 1931, the AGBU Armenian Youth Association (AYA) has been bringing together thousands of Armenian youth around the world through athletics, scouting and other youth programs.

END OF THE PRESS RELEASE

Although AGBU has proudly highlighted in the above press release the role of the Armenian Youth Association in “bringing together thousands of Armenian youth around the world through athletics“, nevertheless the number of Armenian players in the winning Antranik team in the tournament was close to zero percent. 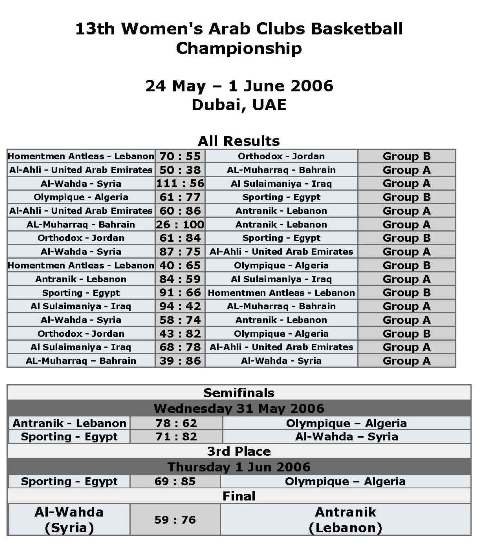