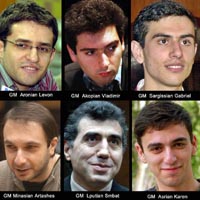 reinforced its status of chess power by winning the World Chess Olympiad in on 4th June 2006.

The Armenian men's team garnered 36 out of 42 points (see chart of final results below). The team included international grand masters Levon Aronyan (the winner of the FIDE world cup), Vladimir Hakobyan, Karen Asryan, Smbar Lputyan, Gabriel Sargsyan and Artashes Minasyan. The Armenian players were leading from the 5th round up to the end (13th round).

won silver with 34 points, the and Israeli men's teams shared the third position with 33 points. Favorite was knocked out of the medal bracket after losing to 1-3 in the final round. took the sixth place, its worst in decades.

As for the Armenian women's team, their achievements are more modest. They shared the 8-10 positions with and the garnering 24 out of 39 points. 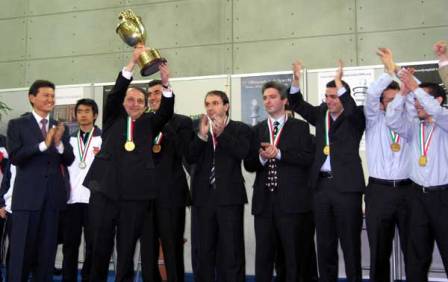 RECEPTION UPON RETURN TO

A great reception in honor of the Armenian chess players was organized in as soon as the players arrived in Zvartnots airport on 6th June 2006 on board of the flight.???

Thousands of Armenians and tens of senior government officials gathered in downtown Yerevan Freedom square to give a hearty welcome to THE Armenian men chess players. They were taken from the airport to the square and driven through the crowd by a Soviet time Chayka car.

Addressing the crowd defense minister Serzh Sarkisian, who is also president of the Armenian Chess Federation, said. “Our chess players have managed to justify our nation's hopes.”

33 years ago thousands of Armenians had been on this very square to welcome Tigran Petrosian, after he won the world chess championship.?

Today's welcome ceremony was followed by a concert and a firework.

Defense Minister Serzh Sarkisian reveled in the limelight early on Tuesday as he presided over the triumphant return home of Armenia's national chess team that swept to a historic victory at the 37th Chess Olympiad in Turin.

, bronze medalist of three previous Olympiads, won the game's most important team competition, which drew to a close on Sunday, for the first time in its history. Its six top grandmasters, led by the world number three Levon Aronian, were the only undefeated team among 148 participating nations and finished far ahead of tournament favorite .

The Armenian players and their coach Arshak Petrosian received a hero's welcome as they arrived at s Zvartnots airport shortly after midnight. They were greeted there by Prime Minister Andranik Markarian, most members of his cabinet, as well as top police and army generals.

“We've made history,” Petrosian told reporters accredited for the welcoming ceremony by the Armenian Defense Ministry. “This is a great achievement for Armenian chess. We are very happy to have achieved that result.”

“We were anxious, happy and cheerful. It was great,” said Gabriel Sargsian, the youngest member of the Armenian team. The 19-year-old grandmaster's strong performance at — 8 wins in 13 games — proved crucial for the overall Armenian victory.

The Olympic champions then headed to the city's where more than a thousand people waving national red-blue-orange flags and chanting “! !” gathered to cheer them. The celebration, featuring speeches by senior officials and performances by Armenian pop singers, was broadcast live on state television.

Sarkisian, who also heads the Armenian Chess Federation, stayed with the Armenian players in the northern Italian city throughout the two-week tournament and received plaudits for their performance. Senior officials close to him claimed that he played a major part in the victory.

“There is no question about that,” said Deputy Defense Minister Artur Aghabekian. “It is essential for any team to have a leader. A good leader is half of victory.”

But Sarkisian, himself a keen chess fan, was more humble in taking credit for the victory at the latest Chess Olympiad. Asked by RFE/RL whether he thinks his constant presence had a positive impact on the Armenian players, he replied: “Why are you asking me? Ask the guys whether or not it had.”

“I just helped them expose their talent,” he added.

Few observers doubt that Sarkisian, who is widely regarded as President Robert Kocharian's preferred successor, will use the Armenian chess success for his reputed presidential ambitions. For a man associated by the Armenian opposition with vote rigging and government corruption, the victory was a rare moment of personal triumph and Sarkisian made the most of it.

“I want to sincerely assure you that your support from was the most important thing for the guys,” he told the jubilant crowd in . “This was only our first major victory. More victories lie ahead.”

Sarkisian is expected to be a key player not only in the 2008 presidential ballot but also parliamentary elections due next year. But he has yet to name the political party or alliance with which he will contest the polls. The powerful defense chief laughed loudly when a reporter told him about a new joke circulating in which says that he will cobble together and lead an electoral alliance of chess players for the 2007 vote.

3- Celebrations in the streets of .