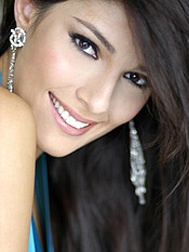 The 20-year-old student takes over the tiara from Natalie Glebova, who went on to win the Miss Universe pageant in last year.

The judges rated the young women on poise, confidence, intelligence, physical fitness, and beauty as they modelled in swimsuits and evening gowns and made impromptu speeches.

Glebova said Panikian, who also took the Miss Photogenic prize, will give a strong candidate for the Miss Universe crown for a second year in a row.

Three Quebecers were among the 10 finalists, but none made the Top 5.

This disappointed runner-up Claudia Cote, who had received the loudest applause from the audience.

“ women are known their warmth and beauty,'' lamented. “It would have been nice to see one of our girls in the final round.”

The title of Miss Universe allows the winner to travel the world in defence of a favourite cause. For Panikian, it will be HIV and AIDS prevention in .

“(AIDS) is very preventible. With education we can save a lot of lives,” she said.

About : Alice Panikian was born in , and came to when she was five years old. She is in her second year at majoring in English and Communications. She loves to read and write and hopes to become a broadcast journalist.

is also a model and has traveled to , and ; she loves meeting new people and learning about different cultures. If became Miss Universe she would use it as an opportunity to speak out on issues such as HIV/AIDS, gun violence, bullying, and other problems facing our society today.

Interests: likes to stay active and takes pleasure in yoga and volleyball. She enjoys spending time with her family and friends and loves to laugh as well as to make others laugh. also loves fashion and has a strong personal style. She spends time volunteering for different non-profit organizations.

What is the craziest thing you have ever done?

One freezing cold night last winter my friend and I were in a playful mood and we decided to go frolic in the snow during a blizzard. We went tobogganing and made snow angels at 1 am.

What charity/charities have you supported with your time and/or resources over past two years?

What would be your “dream job” in life?

My dream job would be a broadcast journalist or a TV show host.

Name one personal accomplishment (in addition to being a Miss Universe contestant) that makes you especially proud.

I recently had the opportunity to represent in the Reinado del Caf? pageant in . It was an amazing experience visiting and meeting other delegates from all over the world. I was not expecting to win the crown but I did, and I felt very honored to be awarded such a title as well as to be representing . This experience made me especially proud because I was one of the only people there who could not speak Spanish, and I managed not to let language become a barrier for me.

What is the most important thing you want people to know about you?

I am a compassionate, loyal and honest person and I like learning and evolving. I accept people from all walks of life.

What is your favourite movie, song, sport, and food?

My favourite movie is The Count of Monte Cristo

My favourite sport is volleyball

My favourite food is fettuccine alfredo

What would you like to accomplish if you win the Miss Universe title?

I would like to bring awareness and contribute help to causes that are important to me and that are present in our country today, such as poverty and HIV/AIDS. It is important for people to be educated on the topics and to know exactly what they can do to help and prevent the problems. I also think it is important to talk to school children about issues such as self- esteem and bullying because these are problems facing the youth of .

A motto that has served you as inspiration.

Learn from yesterday, live for today, hope for tomorrow.