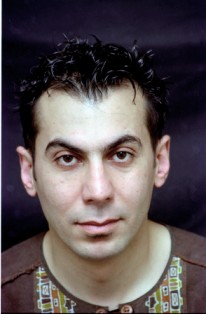 By Carlos Jose Bourdjian
?
Azad-Hye: He is not a singer but a real artist; he is not a superstar but super creative. You may not recognize him if you see him across the street, but you?ll recognize his works once they capture you with their glamour and style.
?
Two years ago, while in Yerevan, a friend of mine introduced me to a person; a jeweler, who later invited me to his workshop to show some of his works. I thought we?ll be finished within an hour. I remember entering his office at 10:00 p.m. ending up at 2:30 am! You don?t feel how time flies while chatting with NUR.
?
He is a simple guy, nice to talk to, clever, humorous, friendly, very human and generous too. He has his own way to understand big issues like Life, Love, God, Religion, Creation, Beauty and Friendship.
?
It is very wrong to call him an ordinary jeweler because he deserves more than this title. He is a master in his specialty. He does not own a shop so you can not go and choose whatever you like to buy. You will see why.
?
With this article you will be introduced to my guest, NUR, to follow later with an exclusive interview showing different sides of his life, works and relationships.

His name is Arman Davitian, ?but everybody knows me as NUR (pomegranate)? he says. Why Nur? Let?s hear the brief story from the master himself.
When I was a child there was a special party in the kindergarten where all the kids should wear like fruits and I chose to look like a pomegranate and was so successful in doing so, that after the party my friends nicknamed me Nur for a while. During high school years the nickname was revived when one of my friends said ?Arman looks very much like a nur, inedible from outside but tasty inside, though with large number of minor irritations? and since then I consider myself a pomegranate because this time the name found me and I should keep it as a good luck sign.


Arman Davitian graduated from the institute of Fine Arts in Armenia (from the Metal design faculty), then the institute of Gemology in Moscow (diagnosis of precious stones) and the Miami University of Arts in the United States (jewelry design and modeling in wax).
?
He is a member of the Armenian Designers Union, the International Association of Designers, the Armenian Artists Union and have received acknowledgment from the UNESCO.
He has worked as the leading designer at the ?Emma? company in the USA.? He was the vice-rector of the Institute of Fine Arts in Armenia for four years, where he also lectured. He has established and manages the ?NUR Design? studio.
?
Davitian is also the designer of the crowns for the ?Miss Armenia? and ?Miss South Caucasus? beauty contests. His series of small plastic arts entitled ?Genius? were awarded the Grand Prix in four international exhibitions.
?
Arman Davitian ?NUR? is recognized as the founder of animation in sculpture.
?
About himself he says:
?I am a happy man. I live in a time I feel is mine and I wouldn?t like to live earlier or later. I create beauty everyday in my workshop. While I?m traveling I feel good as I already know what I?m going to do. This is my world, the world of creative work and beauty. Then all of a sudden this sexless category time clicks in me and I feel that in my mind I am already on my way back home. I love my home, my wife and my twin daughters.
I see my image reflected in two mirrors at the same time, in the faces of my twin daughters, the most beautiful works I have ever made for my wife. Happiness is when you have found your other half, half of Lilit and half of Eve. When these two halves become one, then that is the woman that you love. Yes, of course there is love, forgiveness, mercy. That?s it?. I love?.
?

He has his own theory about the creation of man and woman.
?God created Adam. The latter felt something strange, he didn?t know anything about loneliness or cold at that time, but something was wrong and he was uncomfortable about that. God saw this situation and created Lilit (the firewoman), to inflame Adam?s life. He was warmed up and soon felt hot but God realised that it was dangerous for the firewoman to stay with Adam forever. The earth, from which Adam was created and the fire, of which Lilit was made up, are incompatible elements. So God dispatched the fire into the bowels of the earth. Adam once again felt lonely and cold. He had mixed feelings because he had experienced the sorrow of loss, that?s why God created a woman for him, Eve, shaped from the same material as Adam himself, to protect them from the dangers of fire meeting soil. Yet Lilit still lives on in the bowels of the earth because without her inner life-giving warmth, man could not survive on the surface of the earth, and the earth is for man?.
?
For him the woman originates life. She is the universe, she is the space and that?s why she is self-sufficient; she is perfect like a sphere. A woman is perfect but not absolute, because absolute is the end, pr the death, whereas a woman is the beginning. She is life. A woman has no complexes because she reproduces life. She comes to fulfill her mission in life; that?s why she has no problems. While an inferiority complex is the most important thing in man, because he knows that all along he is just an instrument. Of course he participates in the process of reproduction but in a minimal role. That?s why through his life he always tries to prove to himself, to God and to the whole world that he is capable of achieving something, while the woman needs to prove nothing. This is the whole story.
?
In his work, NUR uses different materials like gold, silver, wood, leather and different kinds of stones. All these are created by God. Then he joins God and becomes an accomplice in that work because he makes them. It is like needing a man and a woman to produce a baby, but in this case the piece of art bears the stamp of its creator and the stamp of the person for whom it is made. That?s why every piece of his work is exclusive and has a name as well.
?
?There are works that I know will leave me, even if they are not made for a specific client. I made a series of brooches, sixty two pieces; Madeleine Albright bought the entire collection. It is interesting?? Davitian says.
?
How can you order a ring or a necklace at NUR studio? And how can he help you choose the right stuff? What is his special way to make everybody (including Turks) recognize and condemn the Armenian Genocide of 1915?
These all will follow in an exclusive interview with NUR in our next article.?
? 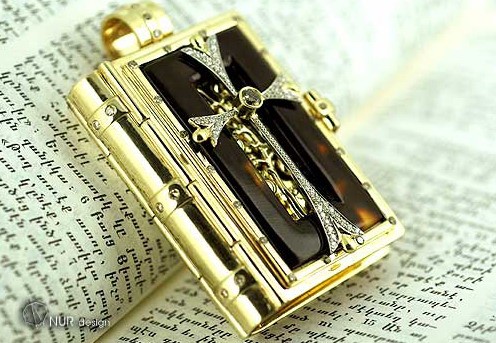