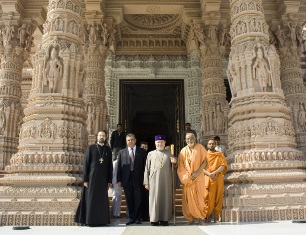 His Holiness Karekin II, Supreme Patriarch and Catholicos of All Armenians, arrived at Indira Gandhi International Airport in New Delhi, the capital of the Republic of India, on Friday, February 23, 2007.  His delegation was met upon arrival by His Excellency Ashot Kocharian, Ambassador Extraordinary and Plenipotentiary of the Republic of Armenia to India, and staff of the Armenian Embassy in Delhi.

On the morning of Saturday, February 24, the first visit of His Holiness during this trip was to ?Rajghat Gandhi Samadi?, the state memorial in New Delhi to Mahatma Gandhi, to pay his respects to the memory of the national hero of India and leader of the Indian independence movement through non-violent resistance.  His Holiness and the pontifical delegation, accompanied by Ambassador Kocharian, were met at the entrance of the complex by the director of the memorial, who escorted the Catholicos of All Armenians to the cenotaph at the center of the park.  His Holiness Karekin II placed a floral wreath on the monument to Mahatma Gandhi and offered a prayer asking for peace in the world, brotherhood among nations and love for one another.  Following the wreath laying ceremony, His Holiness signed the memorial book of the monument.

The pontifical delegation and the ambassador next visited the ?Akshardam? complex in Delhi, a monument and temple of the Hindu faith.  His Holiness was met at the entrance of the complex by a number of Hindu priests, led by one of their most senior members, Sadhu Atmaswarupadas, a Hindu Swami.  During the tour of the complex, His Holiness was introduced to Indian history, culture and national traditions, in addition to examples of Hindu architecture, art and society.  In the afternoon, the Pontiff of All Armenians visited the National Museum of India, where he viewed examples of ancient Indian art, including items created by followers of the Hindu and Buddhist faiths.

On Sunday, February 25, His Holiness and the delegation traveled to the city of Agra.  Agra was the site of the second Armenian church in India, the Church of the Holy Martyrs (Surb Martiros), constructed in 1562.  Although the church no longer exists, there are a number of Armenian gravestones in the cemetery of Agra.  While in Agra, His Holiness also visited the Taj Mahal complex and the historic Fort of Agra.

On Monday, February 26, His Holiness Karekin II and the pontifical delegation visited the Embassy of the Republic of Armenia in New Delhi.  Mr. Haik Sookias, Jr., Chairman of the Armenian Church Committee of Calcutta and Chinsurah had traveled to Delhi to accompany His Holiness. The entourage of the Armenian Pontiff was greeted at the embassy by His Excellency Ambassador Ashot Kocharian, embassy staff with their spouses and families, and Armenians living and studying in New Delhi.  Also present were Armenians from the diaspora currently working in the Indian capital on the staffs of embassies for their respective countries, including the Russian Federation, the Syrian Arab Republic and the Republic of Cyprus.

Ambassador Kocharian greeted His Holiness and welcomed the first visit of a Catholicos of All Armenians to the Armenian Embassy in India.  The ambassador thanked His Holiness for coming and honoring them with his blessings and prayers, and noted that the visit was the best way to celebrate the year 2007 as the 15th anniversary of Armenia establishing diplomatic relations with India.

Mr. Sookias, speaking on behalf of the Church Committee, also welcomed His Holiness and thanked him for the being the first Catholicos to visit India in more than 40 years.  He spoke of the great anticipation with which the Armenians of Kolkata (Calcutta) and all of India will be greeting their Pontiff.  Mr. Sookias further invited all Armenians in Delhi to travel to Calcutta and participate in the re-consecration of the Holy Trinity Armenian Church of Tangra, which will be presided and offered by His Holiness during the pontifical visitation.

Accompanying His Holiness during the pontifical visit to India are Rev. Fr. Ktrij Devejian from the Mother See and Rev. Fr. Hovnan Hakobian as Staff-bearer.

Photo of His Holiness Karekin II, Catholicos of All Armenians, at the Akshardam Temple of the Hindu faith in New Delhi, India.  Pictured with His Holiness are His Excellency Ambassador Ashot Kocharian, Rev. Fr. Ktrij Devejian and Hindu Swami Sadhu Atmaswarupadas.