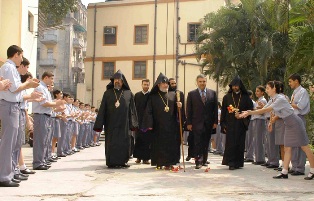 In the evening of February 26, His Holiness Karekin II, Supreme Patriarch and Catholicos of All Armenians, arrived in Kolkata (Calcutta), India.  Accompanying His Holiness and the pontifical delegation from Delhi were His Excellency Ashot Kocharian, Ambassador Extraordinary and Plenipotentiary of Armenia and Mr. Haik Sookias, Jr., Chairman of the Armenian Church Committee of Calcutta and Chinsurah.

On Tuesday morning, February 27, the Catholicos of All Armenians visited the Armenian College and Philanthropic Academy (ACPA) of Calcutta.  The pontifical entourage was greeted upon their arrival at the campus by ACPA Manager Fr. Gulgulian; Deacon Tigran Baghumian, ACPA Administrator; Mr. James Dias, ACPA Principal; all Church Committee members; and teachers, staff and students of the Academy.  The students sang church hymns and escorted His Holiness? procession into the main hall of the school.

The staff, instructors and students had prepared a program in honor of His Holiness, which began following the Lord?s Prayer and the singing of the Armenian and Indian national anthems.

Dn. Tigran Baghumian greeted His Holiness and the delegation on behalf of the academy.  Greetings were also offered by Principal Dias on behalf of the teachers to the guests.  The students presented a cultural program consisting of recitations of Armenian poetry, the performance of Armenian spiritual and folk songs, the presentation of a play in English and the performance of a number of Indian dances.

Following the cultural program, Fr. Gulgulian made his welcoming remarks and introduced Archbishop Baliozian.  In turn, the primate of the Australia and New Zealand once again welcomed His Holiness to Calcutta and invited him to deliver his message of blessing to the students, teachers and assembled faithful.

His Holiness addressed the administrators and teachers first, exhorting them to provide their service of caring and educating the students entrusted to them with vigilance, devotion and love.  The Catholicos reflected on the important role of the instructor in the lives of all children, but here even more so, when these students are removed from their homeland, far from their native hearths, and separated from their parents and family members who love and miss them.  His Holiness instructed the teachers to provide the parental attention and caring love to each Armenian son and daughter just as they would to their own children, so that the yearning which each child feels for home would be lessened by the love they see in the faces of their teachers.

His Holiness next addressed the students of the academy, noting that more than 80 young boys and girls from Armenia, Iran, Iraq and India are currently studying and living as one family within the halls of this historic institution, established more than 185 years ago.  The Armenian Pontiff extended his fatherly advice and blessings from Holy Etchmiadzin to the students, exhorting them to first and foremost, be diligent in their studies and disciplined in their scholastic progress.  He stressed the importance of their educational advancement as a guarantor of their future success and opportunity.  Further, the Catholicos expressed his pride and joy in seeing the bright and happy faces of the Armenian children upon his arrival at the school and mentioned his happiness for being with them for the next few days, to speak with them and witness their daily lives in the school.

The Catholicos also extended his appreciation to the Armenian Church Committee and Armenian community of Calcutta for their continued support of this famous national institution, and stressed its importance not only for the Armenians of India, but for the entire Armenian nation dispersed throughout the world.  His Holiness spoke with admiration and commendation of the Indian Armenian community of the past centuries, who had the vision and commitment to establish the many churches and cultural centers in India, as well as this academy and provide for its future security and stability.

At the conclusion of the program, His Holiness met privately with the administrators and instructors, followed by a tour of the campus and school facilities.  In the afternoon, His Holiness joined the students for lunch in school cafeteria and spent the rest of the day speaking and listening to the children, who were all excited and emotional to have the opportunity to be so close to their Pontiff and spend so much time in his presence.

At the end of the day, His Holiness and the entourage visited the Davidian Girls School (DGS) campus, touring the building and meeting with the staff.  The DGS is located near the ACPA campus and is the girls? dormitory facility.