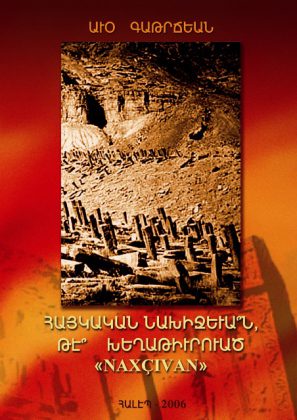 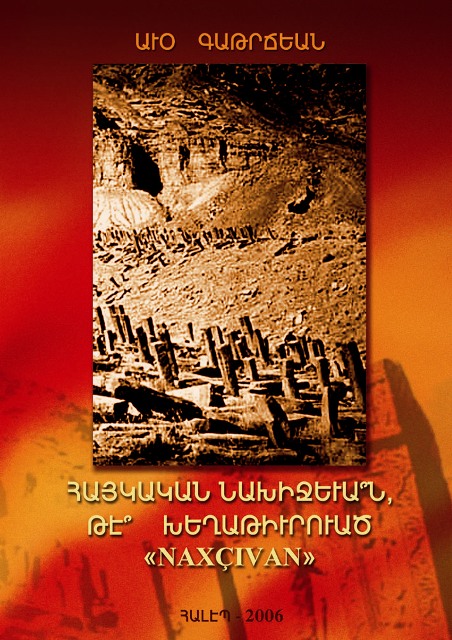 Azad-Hye, 6 January 2006: With the advent of the New Year 2006 a new book was published by Syrian-Armenian writer Avo Katerjian (resident of ). The book, which is one of rare publications dedicated to Nakhichevan (historical Armenian area now under Azerbaijani control, situated between and ), examines the history of Nakhichevan, its villages, churches and well-known people.

The book sheds light on the destruction of the Armenian cultural heritage in that area by the Azeris, referring also to the recent vandalism committed against historical stone-crosses, an act that has received some international attention due to the circulation of a short film showing Azeri soldiers busy in the demolition mission.

Avo Katerjian believes firmly that Nakhichevan cannot be forgotten or wiped out from the Armenian history.

The main chapters of the book:

-The destruction caused by Communism and the arbitrary policy of Stalin.

-The falsification of geographical locations: Numerous locations (including the name of the area itself, many villages, mountains, rivers, etc.) used to have Armenian names but later the Azeris, following the example of their kinsmen in , changed those names into Turkish ones.

-The Annihilation of the Armenian cultural heritage.

-Basic guidelines for Armenian official policy towards the area.

At the end of the book, Avo Katerjian points out that the Azeris are trying to create new facts on the ground. This danger should be faced by the whole Armenian nation, he concludes.

Avo Katerjian has published many articles in the Armenian press dealing with other aspects of Nakhichevan.

The book is enriched with old and recent photos (such as the famous stone crosses) and a detailed bibliography. It ends with a poem written by the author in 1996 dedicated to Nakhichevan and performed by ?Mesrob Mahsdots? Armenian Children?s Choir in . Music by Kayane Simonian-Derian. The same song is included in the accompanying CD.

In a special paragraph Avo Katerjian emphases the gratitude toward the Iranian and Syrian governments as they take care and preserve the Armenian churches and historical monuments in Iran and Syria respectively from any kind of destruction.

Author Avo Katerjian could be reached at: [email protected]

“Yerkir” official weekly of ARF in Yerevan has published on 24 February 2006 the following article in Armenian about the book.