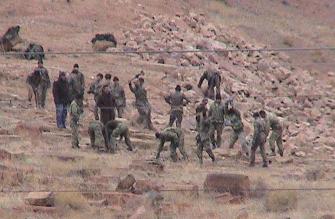 The administration of www.genocide.com was shocked with the comments of Azerbaijani academician Dr. Vali Bakhshaliyev, who, while commenting on the recent destruction of the headstones of Julfa?s ancient graveyard, shamelessly denied the existence of that medieval Christian cemetery. Mr. Bakhshaliyev, indeed, went far ahead in his fabrications than the Permanent Mission of the Republic of Azerbaijan to the UN. The latter ?simply? stated that the evidence about the destruction of Old Julfa (Hin Jugha) is ?totally unfounded.?

The website of the Permanent Mission of the Republic of Azerbaijan – www.azerbaijan-un-geneva.az- published ?Press-guidance? on 4 January 2006, denying the destruction of the ancient Armenian monuments of Old Julfa. The ?guidance? informs in a common Soviet style, ?the Republic of Azerbaijan has been always keen on preserving, in its entirety and regardless of its roots and origin, its cultural and historical heritage.?

The Christian cemetery of Julfa, as stated in a letter of the American congressmen Joe Knollenberg and Frank Pallone, Jr. to the Azerbaijani Ambassador, ?is known to specialists to have housed as many as 10,000 of these intricately carved khachkar headstones, up to 2,000 of which were still intact after an earlier outbreak of vandalism on the same site in 2002.? Steven Sim from Scotland, who visited the ruins of the Armenian holy places in Nakichevan, affirmed in 2005: ?a special state policy of destruction is being implemented in Azerbaijan.?

Photographs from the mid-December (2005) destruction of Old Julfa are available at http://www.armenica.org/history/old-jougha/index.html and http://www.cathcil.org/v04/doc/Photos/Pictures109.htm . The video, taped by the Armenian Prelacy of Iran at the Iranian-Azerbaijani border and made available by www.Blogian.cjb.net , can be downloaded from www.azerivandalism.cjb.net ; the same video (clearer view, but larger file) is also available at www.julfa.cjb.net .

Despite rolling protests from around the world, UNESCO has not yet addressed the recent destruction of the Armenian khachkars (headstones) of Old Julfa. Shameless denial continues with UNESCO?s shameless silence.