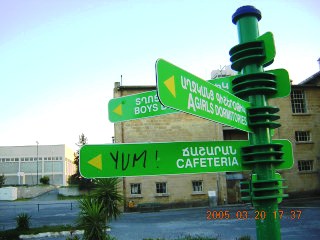 Azad-Hye, , 29 January 2006: The Representative of the Cypriot Armenians in the House of Representatives of the Republic of Cyprus Dr. Vahakn Atamyan paid an official visit to the Armenian General Benevolent Union's (AGBU) headquarters in New York and met with President Berge Setrakian.

A key subject of their discussion was the fate of the Melkonian Educational Institute. Since the AGBU decided to close the historic Melkonian school in , the worldwide Melkonian Alumni (graduates union) have mobilized a campaign to keep the school open. Their efforts have been joined by the Patriarch of Armenians in , Mesrob Moutafyan, who has initiated court cases against the AGBU in and .

According to Dr. Atamyan, contrary to circulated rumors, the Central Board of AGBU has not yet considered any action regarding the Melkonian property. Setrakian has confirmed to the Cypriot representative that AGBU has not approached any potential buyers or developers.

In an effort to mediate and help resolve the deadlock in the Melkonian school dispute, Dr. Atamyan, soon after his return from the above trip, announced the formation of a new committee which will include representatives of the Cypriot Government, AGBU, Melkonian Alumni and local Armenian Cypriot community. The task of this committee would be “to suggest specific programs which would best benefit the Armenian community of and continue honoring the legacy of the Melkonian Brothers”.

In the official press announcement distributed to media Dr. Atamyan stated that although Mr. Setrakian (and the Central Board of AGBU) is firm on his decision to close the Melkonian Institute, nevertheless he agreed with the formation of this committee that will discuss “the future of Melkonian Institute” and further AGBU programs in .