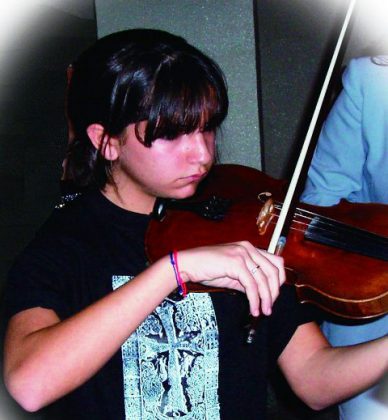 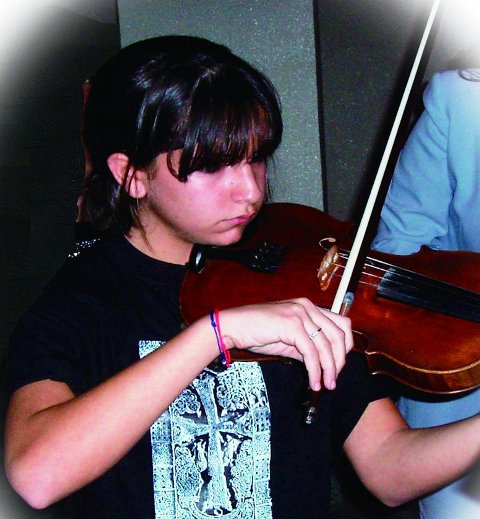 The fast and lively melody of the “Hungarian Dances” by the 19th century composer Johannes Brahms drifts out from the Auditorium at Al Owais Cultural Foundation in Deira, Dubai (United Arab Emirates).

Inside 16 years old Pateil Tuysuzian stands on the stage masterfully performing the Hungarian tune on her violin. She is young, talented, ambitious and above all enjoys to play her beloved instrument alongside musicians from thousand of miles away.

Pateil is member of the “Emirates Youth Symphony Orchestra“, grade five violinists, one of the keen players, and hopes someday will become a professional musician.

?I love playing the violin? says the American pupil.

?I have been playing since I was 4 years old. I saw people learning how to play the instrument and I knew I wanted to become a violinist.?

Pateil moved to the with her parents from eight years ago. Her parents are originally from Lebanon. She joined the orchestra at the end of 2001.

?It is such a good opportunity for her? says her mother Noushig Tuysuzian who is also the Orchestra?s coordinator.

?This year I can really see a change in her. Her confidence has grown and her skills have really improved.?

Few weeks ago and during the commemoration ceremony of the Armenian Martyr?s day (April 24) we had the opportunity to listen to her while she played dle yaman and arev yegav along with the students who shared the evening with their songs and poems in the Ohannessian Armenian weekly school?s hall in Sharjah (UAE).

Pateil?s tunes delightfully touched the hearts of the Armenian compatriots who, under the spell of her music, forgot for a moment the pain of the 1.5 million perished people.

Music ? the key to approach the new generation, along with the knowledge of our heritage and the firm support of our rights.

Pateil?s confident stand and professional act remarkably reflects the meaning of her name PATEIL which means the flake of snow; calm and assertive, yet lovable and appealing to the eye (in this case to the ear). She truly brought a different perspective to the commemoration ceremony.

We wish her all the luck and prosperity, May all her dreams come true.

The above text is compiled by Liza Karajian using personal notes and material from the UAE press.