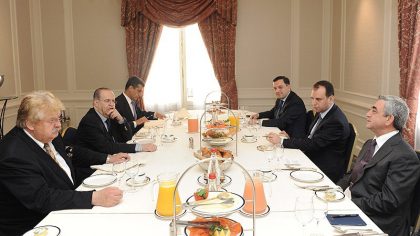 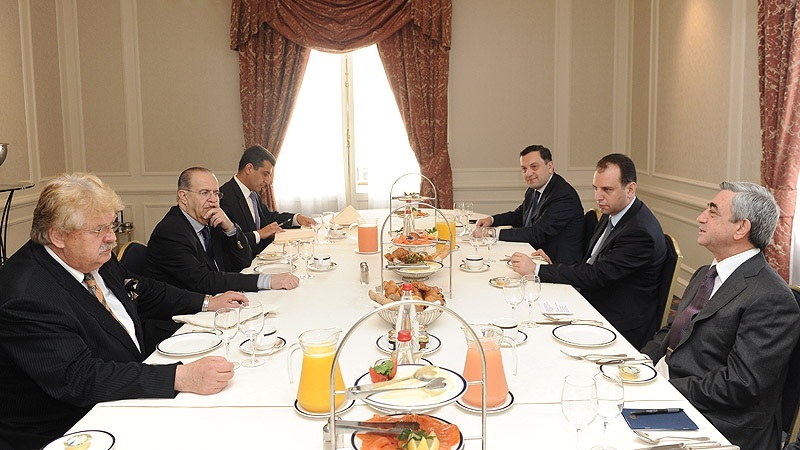 Sargsyan informed the two Members of the European Parliament (MEP) on the recent parliamentary elections in Armenia (May 2012) and on the upcoming presidential elections (February 2013). The three interlocutors exchanged views on further development of EU-Armenia relations and the recently adopted annual report of the European Parliament on Armenia.

Much of the discussion was devoted to the issue of Karabakh. Sargsyan specifically referred to the bloody events that occurred in the region earlier this month (Armenian soldiers killed on the frontline under Azeri attack) and the Basic Principles for the settlement of the Karabakh conflict as proposed under the mediation of the OSCE Group. He referred also to the unfaltering attitude of the Azeri President Ilham Aliyev who occasionally triggers the climate with his warlike statements amid continued military buildup in his country.

President Sargsyan who is in Brussels for the meeting of the EPP thanked the two parliamentarians for their high-principled attitudes towards Armenia and Karabakh. The Republican Party of Armenia headed by Sargsyan has been granted observer status at the EPP since February 2012.

It should be noted that both Brok and Kasoulides are Members of the Consultative Council of the “European Friends of Armenia”, founded in 2009 and headquartered in Brussels.

Ioannis Kasoulides is a Cypriot politician and member of European Parliament. He is member of European People's Party and Democratic Rally (Major political party of the Republic of Cyprus.) He was elected as member of Cyprus Parliament on 1991 and also served as minister of the government of Cyprus for the period 1993-2003. He is Member of the Committee on Foreign Affairs and Vice-Chairman of the Group of the European People's Party (Website www.kasoulides.com).