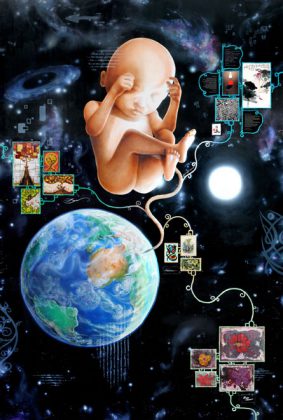 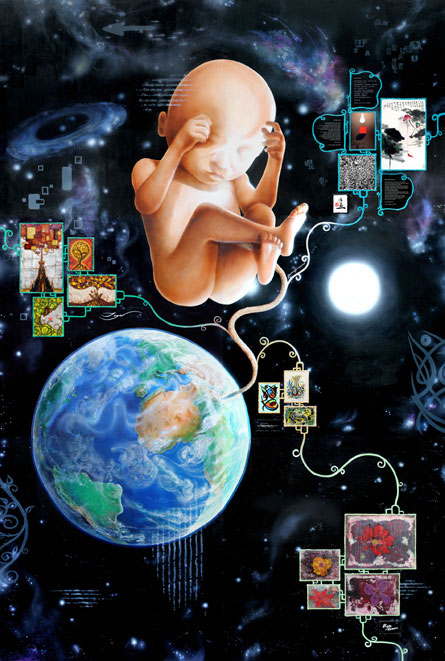 On the occasion of “Earth summit” which took place in Rio de Janeiro, Brazil, in June 2012, a big artwork was created by six artists from Canada, South Korea, China and Lebanon.

Lena Kelekian from Lebanon has been selected as one of the six mural artists.

The artwork carries the title “We are all ONE” and has toured many countries to promote awareness regarding Global warming and finally was delivered to the United Nations conference in Rio.

Incidentally Lena's contribution to the artwork is the one located under the fetus to the right of the planet earth in the center of the artwork.

THE INITIATOR OF THE PROJECT

Mario was born in Montr?al in 1957. He grew up in L??piphanie, Qu?bec and studied cabinet making as a teenager. Inspired by Terry Fox, Mario decided in 1982 to embark on his own personal journey and walk from Victoria, BC to Schreiber, ON. His observation during this 4300 km walk that spread out over three summers led him to care for the environment and dedicate his life to environmental solutions. He produced a series of fine art shows entitled Spirit of the Mountains in Jasper, Alberta from 1989 to 1991.

His dream in life was to create a state-of-the-art ecohouse hostel and with this in mind, he founded the Jasper Ecological Society. The project Green Light to Rio ?92 was born soon after. From the success of the journey that lasted over 11 months, he became fully involved in the construction of straw bale building and has been involved in the construction of many projects in Canada for the past 20 years. Harry, along with his brother, Daniel, have decided to revive the project of the giant postcard mural `We Are All One` on its 20th anniversary. Mario will take part of the Canadian University tour and will deliver the postcard to its final destination at the UN headquarters in NYC. He invites you to share your dream. Mario was born in Montreal Quebec Canada. He raise in the same city and at the country (L??piphanie). He studies in maconnery in the college Joliette.

Lena Kelekian is an internationally renowned artist and painter specializing in painting & restoration of icons and frescoes. She also paints in an abstract style and has a second specialty in environmental design for embellishing cities. She is a university professor of Byzantine Art, owner of the Kelekian Art Gallery & Restoration Center and curator of international art exhibitions and Art Therapy workshops.

Lena holds a MS in Geology/Mineralogy and has rediscovered 89 natural pigments from minerals for painting icons. She has a PhD in Fine Arts & Restoration and a DST in Theology.

Since 1992, she has had 14 private exhibitions and participated in 142 collective exhibitions in 43 countries. She has received 15 gold medals as well as many awards and distinctions. These include the 2008 Beijing Olympic Gold medal, the 'Createur d'Aujourd'hui', 'La Toile d'Or', the Banya Luka city gold medal for arts and prize winner of Joudraniyat competition for city embellishment. Her artworks are on permanent display in 13 museums around the world. 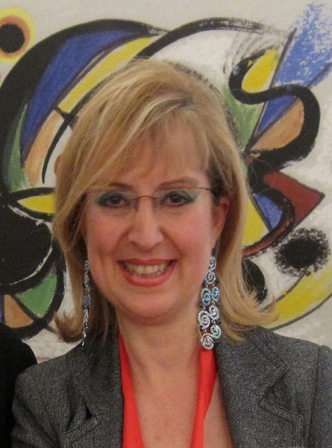 Her works have been acquired by Queen Sofia of Spain, Rev. Billy Graham, the presidents of countries and art collectors all over the world.

Many of her environmental artworks/monuments in cut ceramics beautify several cities in Lebanon and Europe, in tunnels, walls, roundabouts and the ceramic benches of the Ain Mreisse Corniche.

Lena is an active member and president of four cultural and artistic associations and founder of MEADOWS (Mediterranean Endeavors Advancing Development Of Widespread Sustainability) a nongovernmental organization.

She is also the President and curator of the OFAA (Olympia Fine Arts Association).

POEM BY ONE OF THE PARTICIPATING ARTISTS

In the vast universe, there is no up or down,
left or right, front or back.
Earth, a tiny speck of dust within the universe.
Earth, a planet sheltering humans of different
geographical origins, of distinct historical
backgrounds, of diverse cultural traditions, of
particular life habits,
of various original artistic concepts.
Art, a reflection of the human species.
Art, regardless of the quantity of its symbols,
expresses them all, simple or complex, transcending
matter, economy, thought and religion.
Esthetically, human beings are identical.
Beauty exists in nature, time and space.
Through the grace of art, we are no longer different,
we are in harmony.
We Are All One.