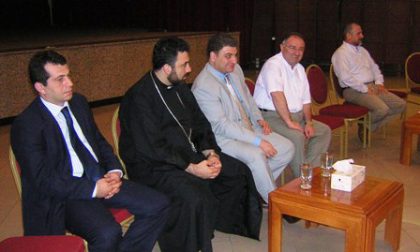 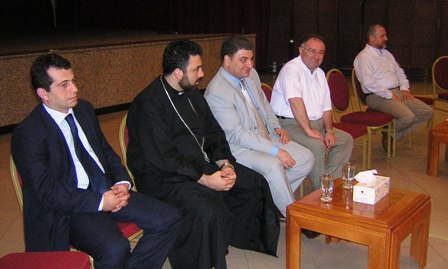 Hrayr Karapetian one of the Armenian Revolutionary Federation's (ARF) leaders and Member of the National Assembly had on 10 July 2007 a questions and answers session in the Sharjah Community Hall with the Armenians of Sharjah and Dubai, during which he briefed the attendants (About 40 persons) on the present day situation in Armenia and shared with them information on issues of mutual concern.

After an overall introduction and political analysis the Armenian parliamentarian, who represents the Arakadzoden Marz, answered questions from a wide spectrum. Issues that were discussed included dual citizenship, the economic revival of Armenia, the present-day blockade, the relations with the neighboring countries, the situation of the Armenians in Javakhq, the prospect of Armenian development in the coming years, the political situation in the wake of the Presidential elections which will take place later this year, the position of ARF regarding these elections, etc.

On Karabakh
“Azerbaijani leaders are in an awkward position in front of their nation. They need, from time to time and for the sake of their internal political consumption, to issue declarations with obvious military tone and full of threats against Armenia”, Karapetian said. “In this way they attempt to constantly feed their public with illusions. The reality though is clear enough: Karabagh is an independent entity and the right of the people of Karabagh for a free life should be protected”.

On corruption
“Corruption is an international phenomenon that hits almost all societies, but in Armenia it is beyond the worldwide average. The real problem is the inability to bring the corrupted officials into trial. Of course there are many who have been punished, but not from the higher political echelon. We need to widen the law enforcement against individuals who have been considered for a long time as untouchable”, Karapetian said.

At some point of the conversation Ambassador of Armenia to the United Arab Emirates Vahagn Melikian answered to questions related to the work of the Embassy and Armenia-UAE relations.

A young participant, who has been new into the community, urged the community to look into one or two sustainability and economic assistance programs available in Armenia and declare support and complete adoption of the development of a particular village or a town.

Several old members pointed out that the UAE Armenian community has in fact been involved in several projects after the independence 1991, besides the involvement in heavy funding of the post-earthquake (1988) reconstruction efforts in Gyumri and the funding of the establishment of the Embassy in the UAE (2000). It was mentioned that the final communiqu? of the Armenia-Diaspora conference in 2002 adopted the development program for the rural and borderline villages of Armenia (about 300 villages). Therefore, there are many ready plans and its is not the lack of the plans is the problem, rather the way to allocate the funding.

Ambassador Melikian pointed out that adopting new projects is always a good idea but we also need to support the already existing and well-studied projects, such as the symbolic “Taste of Armenia” package (worth $100 a box of Armenian rural products). Fortunately some 100 packages were sold in Sharjah alone raising about 10 thousand dollars, but still there are many packages in the Embassy, that need to be distributed before the expiry date of the ingredients.

A participant argued that the financial means of the Armenians in the UAE or elsewhere are not enough to create the desired changes in Armenia, because the sums that are brought up through donations and other fundraising activities will not be enough for a country like Armenia. Besides that, all the Armenians in their communities have financial obligations towards their own establishments and institutions and sometimes towards third countries (where their relatives live or where they have vital interests, such as Lebanon, Syria, Jordan, Egypt, Iran etc., for the Armenians who reside in the GCC countries). But on the other hand, Armenians can benefit from international financial institutions and official financial bodies in many countries where it is the norm to channel some of the financial means to help the developing or under-developed countries. Having influential Armenians or their friends in positions of decision will definitely secure funds for investment and other financial activities in Armenia.

A participant asked about the dual citizenship and when the law that has been adopted will enter into the force. Karapetian said that Armenia now officially accepts that a citizen can have a second citizenship without this resulting in the annulment of the Armenian citizenship. The new regulation limits voting to citizens who are in Armenia at the time of voting. Therefore citizens living outside do not have the right to vote, according to the recent amendments. Ambassador Melikian said that as a result there was no voting in the Embassy during the recent parliamentarian elections. He said that in any case out of one million holders of Armenian citizenship living abroad only 1-2% tended to participate in earlier polls (before the amendment took effect).

Other attendants asked about the preparations of the Army and how ready it is to face the existing challenges especially in the wake of the repeated declarations by Azeri officials who try to escalate the military situation, at least in their speeches. Karapetian assured that the Army is in a very high level of preparation and readiness to face all challenges. “Azeris can declare that they will dedicate their petroleum income to military force instead of using it for the development of their country, but as much as they make such declarations they know deep inside themselves that they have lost the land of Karabakh. It is a sort of verbal compensation what they are doing. Our target however is to reach to a peace settlement”, Karapetian said.

Armenia and stability
“Our main aim should be a stable Armenia. The presidential elections should not be used as a pretext to introduce some kind of instability in the country. This is dangerous and should not happen at all. Our asset is the stability of the country. Only in such circumstances we can develop as a nation. If you examine our history you will notice that whenever we had a relatively peaceful period of time between war periods we had thrived economically, socially, culturally and in all other aspects. We should be ready for any military challenges but in the meantime we should aspire for peace and normalization of the relationship with Azerbaijan”, Karapetian explained.

Turkish threat
“The Turkish threat has not changed. Turkey is still a power that has regional ambitions on the expense of its neighbors. Sometimes Turkey accuses us that we are still keeping Russian border control personnel and army officers. My question is, if we do not see Turkey as a threat and if Turkey is not a real threat then why we are keeping these forces? If only Turkey stops being a constant cause of threat to us and other nations in the area, then we can hope for a better future and positive changes in the regional politics”, Karapetian argued.

There was a question about how Armenia can help in the instance of Armenian communities that appear in difficult situation such as in Iraq and Turkey. Karapetian answered that Armenia should be economically capable for offering job and resettlement opportunities not only for the Armenians of Iraq and Turkey, but to all Armenians.

On other topics, Karapetian emphasized that the present day government has placed Diaspora related issues as a priority. This is a new development in the post-independence period (since 1991), he claimed.

Hrayr Karapetian, the leader of the Armenian Revolutionary Federation faction in National Assembly, told a news conference today that he is entering the parliamentary race with a slogan “Twenty years in politics.”

“All the forces that until now were training, should now show what they can do for the Armenian people to get orientated and elect the force that will be leading it for the next five years.

We have a historic chance to conduct fair election that will be different from all previous ones. There are all prerequisites for that, and if international bodies conclude that the election was not fair, Armenia will find itself in a very tough position in the Artsakh isse and the Millennium Challenge Account because this program will be implemented only if free and fair election is conducted,” Karapetian said. “The party interests should not be put above the national interests.”

He said that the ARF will do everything to ensure democratic election. “Everybody says this, even those who are engaged in using illegal methods, and who from the very beginning distort the idea of fair elections,” he said.

He was asked if it is true that the ARF is taking passports from people, and for example, a family in Davtashen district of Yerevan has been paid $200 to vote for the party.

“It is a lie,” Karapetian said. “People do not understand that no matter how much money they are paid, they still can vote for whomever they want, no one can control the voting.”

He also spoke of the negative things happening in constituency 4 where he is running under the single-mandate system. “I am not against signing a memorandum of understating between the candidates. From day one I have said that I will fight those negative things. I have facts that passports were taken from people. My method is campaigning, I have no other methods.”

He also warned against election fraud saying that tougher punishment is envisaged in the Criminal Code for riggers.

Newer PostSummer Vacations
Older PostKessab under the threat of fire