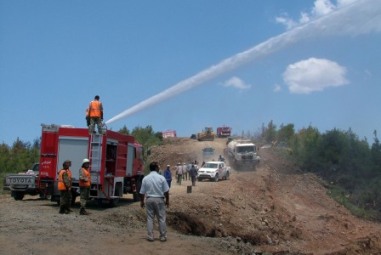 Unfortunately every summer Kessab is victim of forest fires, some attributed to arsons and others to weather conditions, especially that the pine trees, which are so abundant in Kessab and their dry leaves are highly flammable.

This summer the situation was no better. Hundreds of firemen with equipments and support from 5 Syrian provinces rushed to control the big fire that erupted on 14 July 2007. The fire-fighting brigades worked in three shifts. A black cloud covered the northern areas of Lattakia province (north-western Syria), where Kessab is located.

According to the Mayor of Lattakia Zahed Haj Mousa the fire is the result of negligence by visitors who do not take precautions when setting up camp fires.

After 5 days of continuous battle, the fire eventually came under control, although a part of it crossed the border into the Turkish territory of Iskandaroun (Hayat). At some point the fire was almost extinguished, but the inability of the Turkish side to control the situation and the blowing of dry northern winds rekindled it and caused further damage.

Fortunately the main part of the forest (known as Frounloq) remained intact, due to the successful efforts in isolating it from the rest of the area.

The fire affected an area estimated 20 kilometers in length and 500-3000 meters wide. There were no human injuries.

On the other hand the local media criticized the work of the fire-fighting department arguing that it is not possible to fight a wide spread forest fire (repeated every summer) with only 4 battered helicopters (originally for military use but adjusted for fire-fighting). 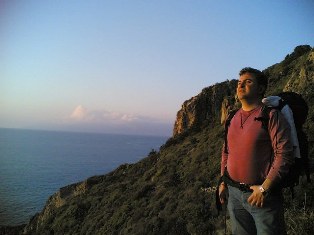 Kessab … an ideal location for tourism

Armenians residing in the United Arab Emirates can head for Kessab in the North-West of Syria for their vacations.

Kessab is an Armenian populated town with several nearby villages, located about 20 kilometers from the Mediterranean seaside, at an altitude of 800 meters (the Casius / Aqraa Mountain is about 1700 meters high, the highest in Syria).

Azad-Hye Photo: Click to enlarge the photo of an Armenian tourist (Rafi Balji) who spent few days this summer in Kessab and visited the slopes of Karadouran, facing the historical Musa Dagh area.