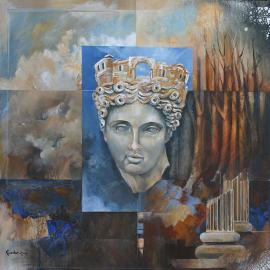 In this exhibition the artist presents two entities- paintings and abstract compositions with mixed media.

In the second entity, the artist brings to the surface another aspect of his talent, which perhaps was unknown until now. Putting together parts taken from electronic appliances, numbers and signs from already obsolete items he constructs an image which has a three dimensional sensation. The numbers and geometrical patterns in these works project an association of ideas and the end result is coherent, well balanced and exceptionally interesting.

The paintings of the artist are already very well known to the art-loving public for their distinctiveness and the iinfinite calmness and tranquility which they project. They seem to originate from the land of dreams as if existing only in the realm of thre world of fantasy.

The artist creates his own “landscapes” and reflections on specific historic, cultural as well as everyday events intrigue the onlooker with memories. There is ample movement on the canvas where paint is flowing thus creating motion and energy.

The works of John Guevherian project a surrealistic dimension, even though the real symbols used, such as ancient sculptures, remnants of historic buildings and amphorae, are clearly visible on the canvas. Opening frames within frames, cosmic scenes coexist on the same plane with familiar landscapes casting a bridge between the two and challenging the viewer.

Some constructional and cubist elements hint at the duel role of Guevherian, that of the Architect and the Artist.

Guevherian has distinguished himself in his professional domain of architect as well by participating successfully in numerous Pan-Cyprian architectural competitions and winning several first prizes, including the Headquarters of the Cyprus Sports Organisation (KOA) in , the “Kition ” covered athletic centre in Larnaca, including the Olympics swimming pool, and a housing project in Kaimakli of the Cyprus Land Development Organisation. His other prizes include the Ministry of Foreign affairs and the Sports Centre in Agros and Limassol.

John Guevherian lives and works in and maintains a serious and steady presence in the art world with his solo exhibitions as well as participation in various group exhibitions. The present is the 10th solo exhibition of the artist.