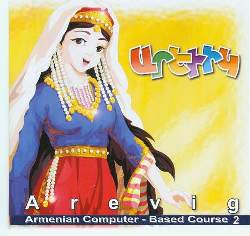 The second part of the computer-based popular Armenian language course ?Arevig? was released recently. Similar to the first part, this CD also is funded by the based Calouste Goulbenkian Foundation?s Armenian Communities Department and comes under the patronage of the Catholicosate of Cilicia. It is realized within the 1600th anniversary celebrations of the creation of the Armenian Alphabet by Mesrob Mashdots.??

Asdghig Tchamkerten member of the Central Committee of the above Department points out in the introduction that appeared on the inner cover of the CD: ?We are introducing the second part of a three folded project of learning the Western Armenian. Arevig 1 has addressed the alphabet recognition needs of pre-elementary and early elementary level children up to the third grade. Now the second release of this serial Arevig 2 will cover further level of study?.

The project is the outcome of cooperation between , and . The educational supervisor is philologist Garo Arakelian (), while technical staff is recruited from . The head of the programming section is Michael Sarkissian. 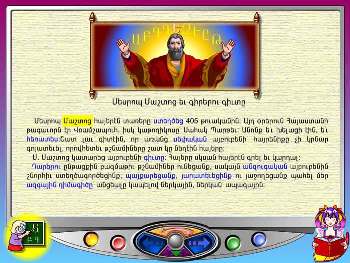 using modern audio-visual technology. It goes beyond this to fulfill the language needs of grown-ups who did not have the chance to learn their mother tongue at earlier stages. Anyone who aspires to strengthen Armenian language skills can benefit from this valuable tool.

Although the work is almost flawless, we still detected some orthographic mistakes. It is noticed also that some pages load with accompanying music in a way that the user is obliged to wait until the end of the music, before carrying on to the body of the text.

Although Gulbenkian Foundation has the copyright ownership of the project, it is expected that the CD will be widely copied and duplicated without prior consent, as it happened with the ?Arevig 1?.

For further suggestions and comments you are kindly asked to communicate with: