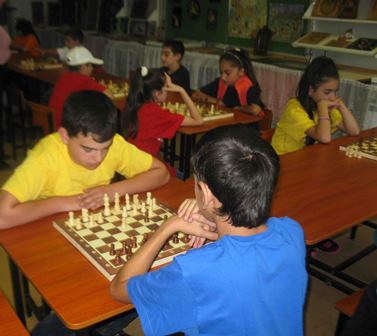 Tekeyan Centre Fund continues to support Armenian educational institutions and serves as a liaison between Tekeyan schools of Armenia and Artsakh (Karabakh).

On 20 & 21 September 2014, the Fund held its regular inter-school program: the 3rd “Tekeyan games” sporting event. The event was dedicated to the 23th anniversary of Armenia's independence.

The objective of the event was to activate the sporting life in the schools and the role of sport, promote good health and healthy life of children as well as to assist in integration and collaboration between schools of different regions.

The competition consisted of seven sports: chess, basketball, volleyball, tennis, run, pushing-off the ground. Six teams participated: 90 pupils and a coach from the schools named after V. Tekeyan of Armenia (Yerevan, Gyumri, Stepanavan, Karbi) and Artsakh (Berdzor) as well as from Lord Byron school of Gyumri. The fund enabled pupils to win a prize and be useful for their school by team participation.

All teams distinguished themselves by their competitive spirit, desire to win and physical training. After two-day competition the prizes were distributed as follows:

The awarding ceremony was held in Gyumri's V. Tekeyan school, which prepared the ceremony with the participation of school?s acrobats and singers.

The Fund's director Armen Tsulikyan awarded certificates and prizes to all teams and wished them new achievements and success. He added, also that “there are no losers in Tekeyan games, since this program promotes the development of healthier young generation, friendly contacts and the establishment of new relations”. He also thanked all schools, particularly Tekeyan and Byron schools of Gyumri for supporting the program.

Newer PostKhachik Asryan: From the standpoint of our security, it was the right decision to join the Eurasian Customs Union
Older PostA Middle East With No Minorities?