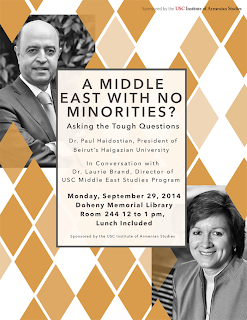 Reverend Paul Haidostian, President of Beirut-based Haigazian University, will be the guest of the USC Institute of Armenian Studies at a lunch-time conversation to be held on Monday, September 29, 2014, at noon at the Doheny Memorial Library Room 244, on campus.
Entitled “A Middle East Without Minorities?” Dr. Haidostian will speak about the recent turmoil in the Middle East and its impact on the various ethnic and religious minorities of the region.  USC Professor of International Relations, Dr. Laurie Brand, will be guiding the discussion.
Rev. Haidostian has been president of Haigazian since 2002. In addition to his local and international responsibilities in educational, religious and ecumenical organizations, he teaches, lectures, and writes in Armenian, Arabic and English on a wide variety of topics including Armenian identity, ecumenism, youth, social issues, theology, religion, and community.
Rev. Haidostian is currently the Chair of the Central Committee of the Union of Armenian Evangelical Churches in the Near East. He will be a guest at the Institute's anniversary gala to be held at the Beverly Hilton on September 28.
Dr. Laurie Brand is a professor of international relations at the University of Southern California School of International Relations. She specializes in the international relations of the Middle East, including political economy of the region and inter-Arab relations. She is the author of several books on the region, including most recently, Official Stories:  Politics and National Narratives in Egypt and Algeria, published by Stanford University Press. She is a past president of the Middle East Studies Association of North America in 2004.
Salpi Ghazarian, the newly appointed director of the USC Institute of Armenian Studies, says, “We invite the community to the USC campus to this program. This is not a lecture. It's a conversation between two people who know the region well. Dr. Haidostian's intimate knowledge of the Middle East, and his readiness to share his insights are very valuable, now, at a time when we are all trying to understand what is happening in the Middle East, and why. Dr. Laurie Brand heads USC's Middle East Studies Program and we're grateful for her participation.”


About the Institute
Established in 2005, the USC Institute of Armenian Studies supports multidisciplinary scholarship to re-define, explore and study the complex issues that make up the contemporary Armenian experience ? from post-Genocide to the developing Republic of Armenia to the evolving Diaspora. The institute encourages research, publications and public service, and benefits from communication technologies that link together the global academic and Armenian communities.

Newer PostTekeyan games a sporting event for Armenian and Artsakh pupils
Older PostTourism: Where do citizens of Armenia travel?