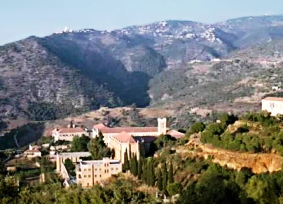 New Revelations on the Armenian Genocide

Subtitle: The French College in Aintoura, Lebanon or Jemal Pasha's orphanage where Armenian children were to be turkified.

Summary: Missak Keleshian discovers photos and documents about the transformation of the French College in Aintoura, Lebanon to an orphanage, where children survivors of the Armenian Genocide were gathered to be turkified.

The Armenian nation lived the most horrible phase of its history in 1915. The Ottoman authorities executed the Genocide which resulted in the killing of over 1.5 million Armenians, while most of the Armenians remaining on the western parts of historic Armenia were compelled to leave there cities and villages and deported, marched towards the deserts of Iraq and Syria.

Parts of the deported Armenians reached Lebanon where they believed that they were left in peace without realizing that in one of the not-so-far villages of Lebanon, namely Aintoura, which is about half an hour drive from the capital city Beirut, a plan of turkification of Armenian orphans had been put in motion in 1915.

Such a new page in the history of the Armenian Genocide was recently discovered by Missak Keleshian, who is an avid collector of all kinds of photos of the Armenian Genocide. This is how he speak about this most recent discovery: “A few months ago I was reading a book entitled “The Lions of Marash” by Stanley E. Kurr, who tells about his personal experiences with Near East Relief during the years 1919-1922. In the book I cam across a shocking photo with the following caption: “Jemal Pasha…on the steps of the French College at Aintoura, Lebanon. Jemal Pasha had established an orphanage for Armenian children in the college building and had appointed Halide Edib to be its directress”. Halide Edib Hanum was a famous Turkish feminist and very well known for her efforts to turkify Armenian orphans. Beside being shocking, the photo was the first step that lead to a new discovery.

“On December 8, I visited the village of Aintoura and located the school where the photo was taken. It's a famous French College and it was established by the Jesuit priests. I met with the school principal and after showing him the photo, I asked for his permission to research the school's archives for additional information about it and reveal its entire history. He was also amazed by the photo and asked the archivist of the school to assist me.”

“The archivist of the school came to Lebanon 43 years 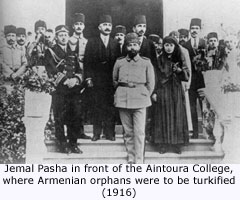 ago and has been since working in the archive of the French College in Aintoura.

I showed him the photo and explained to him what I was looking for.

To my amazement he was not only well aware of that part of the school's history that I was interested in but he had also gathered all the archival material pertaining to that period in a separate file which he gave to me.”

According to Missak Keleshian, the most important revelation of the photo is the presence of Jemal Pasha and Halibe Hanum beside Armenian orphans. Halide Hanum was one of the world renown feminists of her times. She had received higher education and as one of the early feminists met with Gandhy and visited the United States of America for meeting with the leaders of the feminist movement there. She fell in love with Kemal Atatourk but the latter rejected her. Halide Hanum was a strong supporter of the pashas who planned, organized and executed the Armenian Genocide and played a crucial role in the efforts to turkify the remnants of the Armenians and was one of the leaders of that effort.

Read the rest of the article and see more pictures at: